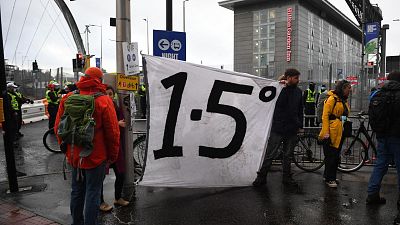 With tears and overtime, came the end to COP26 on Saturday. The result? A deal that leaders, environmental groups and activists called a “compromise”.

So as the Climate Action Tracker puts the world on the path to 2.4C of global warming, what were the highlights and lowlights of this historic agreement?

Phase down not phase out

This was the first COP decision to explicitly target fossil fuels and before now coal and fossil fuel subsidies had never been mentioned in a deal. This final decision text, known as the Glasgow Climate Pact, saw countries agree to “accelerate efforts” to phase out “inefficient” subsidies for fossil fuels.

It also saw a last-minute deal between the US, EU, China and India change the wording of the text. Instead of pledging to “phase out” coal, it instead committed to a “phasing down”.

This part of the deal has drawn criticism around the “watering down” of commitments around coal. After being agreed, the pact was condemned by small island states - for whom keeping global warming below 1.5C is essential for survival - like Switzerland, Mexico and the EU, (despite its support for the original wording).

Critics say this shows a lack of leadership from some of the biggest emitters on the planet.

Even COP26 president Alok Sharma, clearly emotional at the close of the summit, was “deeply sorry” for the way the final minutes unfolded.

“The absence of leaders from Russia and China, two of the world’s largest carbon emitters, and the last-minute intervention by India and China to water down the language on coal, have been pivotal to the event's shortcomings,” says former Green MEP and economics professor, Molly Scott Cato.

“This is a diplomatic failure of the last few decades during which geopolitical manoeuvring and self-interest has shamelessly dominated the climate crisis.”

But some governments decided to do things a little differently on fossil fuels outside of the final COP26 deal. On Thursday, Costa Rica and Denmark came together to form the Beyond Oil and Gas Alliance.

The requirements for becoming a full member of the group are ambitious, requiring governments to set an end date for oil and gas production within their own borders. This end date has to be aligned with the Paris Agreement goals too.

“Our goal is not small, our ambition is not modest. We hope that today will mark the beginning of the end of oil and gas,” Denmark's Minister for Climate, Energy, and Utilities, Dan Jørgensen said at its launch.

Keeping the goal of 1.5C alive

One of the main aims of COP26 was to keep the goal of limiting global warming to 1.5C alive.

This is essential for countries on the frontlines of the climate crisis. As the Prime Minister of Barbados Mia Mottley said in the opening days of the conference, anything above this would be a “death sentence” for millions living in vulnerable island nations.

The final deal in Glasgow kept this dream alive - but only just. Greenpeace International executive director, Jennifer Morgan said that the deal was “meek” and “weak” - delaying action once again.

The deal was “meek” and “weak” - delaying action once again.

“While the deal recognises the need for deep emission cuts this decade, those commitments have been punted to next year,” Morgan said. But she added - a “signal has been sent that the era of coal is ending. And that matters.”

“Glasgow was meant to deliver on firmly closing the gap to 1.5C and that didn’t happen, but in 2022 nations will now have to come back with stronger targets.”

UN secretary-general Antonio Guterres also said that while it was an “important step”, the pact was not enough.

“We did not achieve these goals at this conference. But we have some building blocks for progress.”

Guterres also shared a message for young people, Indigenous communities and female leaders who had been struggling to make their voices heard in Glasgow. He said he “knew they were disappointed” but that “the path of progress is not always a straight line.”

What about funding for vulnerable nations

A lot of progress was made in Glasgow on funding for vulnerable nations but, in the end, COP26 seemed to fail those most impacted by climate change now.

Developing countries wanted a plan for funding for loss and damage caused by historic emissions. And in the final hours of discussion, the US, EU and UK resisted calls to create financial support to the victims of climate change.

Historically, there is a belief that this amounts to admitting liability for the damage caused by the crisis.

#COP26 was nearly a breakthrough moment for #LossAndDamage — it seemed for a brief hopeful moment, that in Glasgow, leaders might finally commit to establishing an international #LossAndDamage fund to help vulnerable countries already losing so much to the climate crisis

“It seemed for a brief, hopeful moment, that in Glasgow, leaders might finally commit to establishing an international loss and damage fund to help vulnerable countries already losing so much to the climate crisis.”

There was some small hope for the future of this vital funding, however. Scotland was the first and only nation to pledge money specifically for loss and damage. The government announced a £1 million (€1.2 million) investment into helping developing countries cope with disasters such as flooding and wildfires.

“We’ve benefited through generations from the emissions that have been pumped into the atmosphere. And countries like Vanessa’s are right now paying the price.”

A key outcome of COP26 was the agreement on the “Paris rulebook”. This document regulates the technical details of the Paris Agreement and the conclusion makes this historic accord fully functional.

More than 190 countries agreed to it, after discussions about carbon markets, timelines for emissions reductions and guidelines on transparency.

“I thank the Presidency and all Ministers for their tireless efforts throughout the conference and I congratulate all Parties on finalising the rulebook. This is an excellent achievement,” said Patricia Espinosa, executive secretary of UNFCCC.

“It means that the Paris Agreement can now function fully for the benefit of all, now and in the future.”

Now the real test of COP26 begins with the delivery of what has been promised. The next 18 months could be crucial as countries work out how to keep the world aligned with 1.5C, a task that means cutting global emissions by at least 45 per cent by 2030.