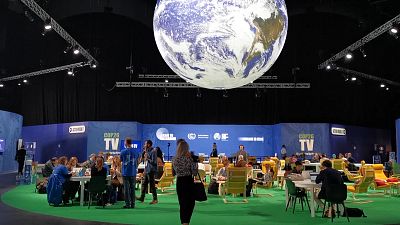 In the wake of the COP26 climate summit in Glasgow, we ask when the decisions to reduce greenhouse gas emissions will have an impact on our climate, and report on a new European initiative to measure CO2 emissions using satellites.

Some of the headline decisions to come out of the UN's climate summit this year include:

Hundreds of financial organisations have also decided to back clean technology in a bid to move away from fossil fuels.

Before we take a look at the post-COP26 climate risks and realities for Europeans in the decade to come, let's have a look at the latest temperature data from the Copernicus Climate Change Service.

The map of temperature anomalies shows that Europe was divided between the northwest and the southeast. Norway was actually 1.9 degrees above average, while from Greece across to the Caspian Sea temperatures were well below average for the time of year.

However, the most striking temperature anomaly was seen in northern Canada.

Some places were 7 degrees above in October, meaning that areas that would normally be frozen at that time of year were actually above zero degrees for the first time since records began. The warm spell in the Canadian north is being seen as a new symptom of the rapid warming we have seen in the Arctic in recent years.

It may come as a surprise to many, but at the moment there is no way to accurately measure how much CO2 is pumped into the atmosphere by big industrial sites, cities and even countries. Carbon dioxide is colourless, odourless and mixes instantly into the atmosphere. Tracking how much many sources are emitting is incredibly complex. At the moment all figures are based on indirect estimates.

However, a new European initiative is aiming to fix that problem with a breakthrough carbon dioxide emissions monitoring system. From 2026, CO2MVS will combine satellite scans and computer models to better define who is emitting what and when.

Vincent-Henri Peuch, director of the Copernicus Atmosphere Monitoring Service explained the system to Euronews: "It's a new capacity that we are developing, which will be based on new satellite instruments, which we expect to be launched by 2025. And this new capacity, combined with modeling tools, will allow us to estimate emissions of CO2 as well as methane."

"It's very important to fighting climate change, but it's also important to know whether the actions on curbing emissions are working. So this capacity will come as a tool for the countries to see if their efforts are working well," he said.

'Closing the loop' on CO2 emissions

CO2MVS will basically fill the knowledge gap that we have on anthropogenic greenhouse gas emissions. "There will be a possibility to verify the emissions using numerical models and compare with incoming observations and in a way, close the loop and make sure that what we think we emit in terms of CO2 emissions is actually what's in the atmosphere," Peuch explained

CO2MVS promises a resolution of two kilometres. This means that countries will find out precisely where CO2 is coming from, including spotting sources that may have been underestimated, overestimated, or simply invisible until now.

Peuch does not think that CO2MVS will 'revolutionise' the current knowledge of European emissions, which are already well calculated. However, "In other parts of the world there may be more surprises, and even in Europe we may find in the detail some things that are not exactly as we thought," he said.

Despite most of the talks at COP26 being around the reduction of emissions, the actual concentrations of CO2 in the atmosphere continue to rise.

You can see in the graph above that there are fluctuations according to the seasons in the northern hemisphere, but the level continues to go up and we are now at an unprecedented high in human history.

What next for our climate?

What should we expect from the climate in the next 10 years and will the decisions taken at Glasgow have any effect by 2030?

Ed Hawkins, professor of Climate Science at the University of Reading, says that "over the next decade, things are going to warm up whatever happens to our emissions." However, he argues that the decisions on emission reductions taken at COP26 are about the long term, about what happens after 2030 and even beyond 2050.

2021 has already given us a taste of what is to come. Climate change-related extremes ranged from forest fires in Greece, Spain and France, to deadly flooding in Germany and Belgium, and a near-50 degree heatwave in southern Europe.

In the coming decades, such weather extremes are projected to become more frequent and more intense in some regions.

Europe's mountain ranges are also going to change in the next decade, regardless of the decisions taken at Glasgow. Euronews spoke to Professor Matthias Huss, a glaciologist at ETH Zürich, who explained European glaciers are going to retreat because of the warming that is already underway due to the greenhouse gas concentrations in the atmosphere.

There are multiple risks from a mountain range with retreating glaciers, he told our reporter Grégoire Lory. "There are various impacts of glacial retreat. For example, water resources are strongly affected by glaciers. Glaciers are a water reserve in the high mountains and do provide a lot of water in the hot and dry summer season. If they are gone, we might face a shortage of water, especially during drought periods."

There are also more dramatic hazards associated with climate change in mountain areas, with phenomena such as glacial lakes building up and suddenly collapsing, creating floods downstream and dangerous instabilities on mountain slopes.

However, Huss said there is some hope that the ice-capped Alps will not disappear completely in summer in the decades ahead. "There's still some hope we can still change between losing all glaciers in the European Alps with no climate change mitigation and keeping about 40 percent of the present volume," he explained.

Our climate system is slow to react, so even with rapid emissions reductions, the effects of climate change, such as sea-level rise, will be felt until the end of the century and beyond.

As Hawkins underlined, many people are realising that climate change is affecting us here and now, "It's not just a problem for our children and our grandchildren."

"It is very clear now that we're already experiencing the effects of climate change in Europe and around the world, especially in how our extreme weather is changing," he said.

"We will see more intense heatwaves across the continent and in the Mediterranean regions, we may well see more 50 degree days over the coming years."

Hawkins concluded by stressing that Europe should turn attention to building resilience to the effects of climate change, with early warning systems for floods and heatwaves and a reinforced effort to use climate data to plan for the future and adapt to our warmer planet.

How do we boost Europe's wind sector and meet EU climate goals?

Heatwaves and snow: What's really happening to the Antarctic climate?

After a dry winter, how is Portugal learning to live with drought?

Volcanoes and climate change – how do they connect?

The wonder of wetlands: the secret weapon in the battle against climate change