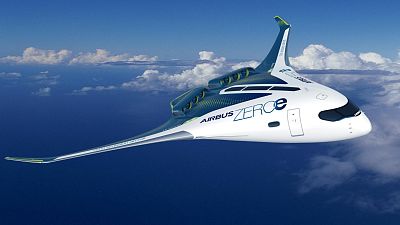 Whether it’s to jet off on a summer holiday or to meet important business partners, flying has become an indelible part of 21st-century living. But it comes at a price to the planet.

While many climate activists are arguing we should limit how often we fly, for the flights we do take, it’s important we reduce the climate impact of each mile.

Across the aviation industry, work is being done to cut down flight emissions. Many airlines have already committed to being net-zero by 2050. Here, we take a deep dive into all the ways they want to achieve that.

Efficiencies on the ground and in the air

Without even altering the planes, many airlines have taken measures that cut down emissions on every flight.

The amount of time planes are kept idling while on the runway has been cut, and intelligent systems are making sure that passengers on flights are maximised, cutting down on empty seats.

But the biggest efficiencies come in the air.

For example, Norwegian has teamed up with the Met Office, the UK’s weather service, and AVTECH to coordinate their flights so they can make intelligent use of tailwinds and optimal flight paths, allowing planes to save on fuel.

Norwegian estimates this tech can reduce CO2 emissions by up to 15,000 tonnes per year.

The airline also uses an AI system called SkyBreathe, which provides pilots with personalised breakdowns of their flights and the ways in which they can save on fuel burnt throughout the journey.

“SkyBreethe has the potential to reduce our fuel consumption by 2 per cent,” says Anders Fagernæs, vice president of sustainability at Norwegian.

Further reductions can come from working alongside air traffic control to improve the efficiency of the airspace, Fagernæs explains.

With enough organisation, planes can make quicker and more direct landing patterns, instead of long maneuvers that waste fuel.

“We need to understand that pilots are energy managers,” Fagernæs says. “If you can have a continuous descent, like a bird, instead of going up and down, and back and forth, that will really improve the efficiency on board.”

Will we ever see hydrogen-powered planes?

Although efficiencies do cut down on flight emissions, many people are holding out hope for removing carbon entirely from the aviation industry.

Hydrogen-powered planes would see an end to carbon being released into the atmosphere due to flights but are they feasible?

“It is one of the most energy-rich fuels by mass but one of the least by volume, so it must be stored on the aircraft in liquid form, which is very cold.”

“It may be difficult to carry enough so hydrogen-fuelled aircraft may be limited to mid-range rather than long-haul,” he says.

While it may be a pipe-dream for long-haul flights, there are companies working on small short-range hydrogen and electric planes.

Scottish airline, Loganair, this year announced its plans to convert their 9 person island hopping planes to run on hydrogen.

“We believe that these technologies will have a significant impact on short-haul, domestic and intra-European flying,” says Andy Smith, head of sustainability strategy at Loganair.

“They promise genuinely zero emissions at the tailpipe operations with lower noise and impact on local communities.”

The importance of SAF

While we’re waiting for fully carbon-less jet fuel, there have been big developments in making sustainable aviation fuel (SAF).

SAF is created by breaking down vegetable, animal and other waste products to form a fuel that can be mixed with traditional jet fuel without a need to change the aircraft.

When fuel is burnt, it releases the carbon that was absorbed by its sources. If those sources are renewable, as in the case of SAF, it means over the lifecycle of the source, the emissions are carbon neutral.

But implementation will still take some time with SAF.

“That’s a tiny proportion, and it's also very expensive. It’s about three to five times more expensive in a very competitive market where the fuel cost is up to 30 per cent of an airline's total cost base.”

There have been big advances in the last year. In February, KLM operated the industry's first flight using synthetic kerosene made from entirely renewable sources.

“From the 737-800 Next Generation to the 737-8, also known as the max, they say there’s a roughly 15 per cent fuel efficiency improvement,” explains Fagernæs.

KLM is another airline scaling up their SAF production, but at the moment fleet renewal is helping them reduce their CO2 footprint significantly, a KLM spokesperson explains.

“This year KLM added the first of 25 new Embraer 195-E2 aircraft to its fleet. This aircraft emits 31 per cent less CO2 per passenger than its predecessor,” Marjan Rozemeijer, press officer for KLM says.

Many airlines are also taking part in carbon offsetting schemes. This is where they invest in regeneration projects, such as planting forests, to reduce the carbon in the atmosphere at an equivalent rate to the carbon created through flying.

Loganair’s GreenSkies initiative is an example of these carbon offsetting schemes. Loganair has purchased credits in Albano Machado and Rios dos Índios projects in Brazil. Both schemes are small-scale hydro plants which displace fossil fuel energy production in the national grid.

Carbon offsetting allows us to achieve carbon neutrality while we develop and test the necessary technologies for net zero.

“The criticism of offsets largely rests on the assumption that it is a strategy to avoid making the necessary changes to our operations,” Smith explains, but notes how it’s an important step while working on future ambitions.

“Carbon offsetting allows us to achieve carbon neutrality while we develop and test the necessary technologies for net zero,” he explains.

What customers can do

As much as the responsibility to reduce emissions for flights rests largely on the aviation industry’s shoulders, you might also be asking yourself what you as a passenger can do.

Alternative Airlines is a flight booking site that has started to offer climate-conscious guidance to customers when booking flights. They are also developing a carbon offsetting scheme as well as a system that calculates the CO2 emissions of the flight you are booking.

People are going to be able to factor emissions into their choice.

“We think this will help customers make more informed decisions when booking their flights,” says Dom Herrera, head of marketing and SEO at Alternative Airlines.

“It takes factors like the aircraft type, how popular the flight is and how many people will be on it, as well as how many stops it will make,” he explains.

“People are going to be able to factor emissions into their choice, and many might be willing to pay a little extra for a flight that has fewer CO2 emissions.”

'You don't need nuclear to get to net zero,' says climate professor

What do green campaigners think of BP’s plans to reach net zero?