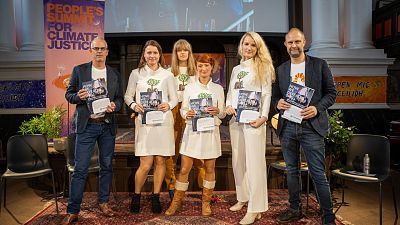 Milieudefensie at the launch in Glasgow of their guide to suing a big oil company.   -   Copyright  Milieudefensie
By Rosie Frost  •  Updated: 10/11/2021

How do you sue a fossil fuel company? It's a question the team at Dutch environmental organisation Milieudefensie have been asked a lot in the past year.

In May, they won a landmark climate case in the Netherlands that saw Royal Dutch Shell ordered to cut its global carbon emissions by 45 per cent by the end of 2030.

It was the first judgement where a multinational corporation was held responsible for its contribution to climate change - forcing Shell to align its business plans with Paris Agreement goals. The story quickly spread around the world, reaching more than 100 million people.

Since the victory, Milieudefensie says that people from all over the world have asked how exactly they did it.

Now in the midst of COP26, they have released a DIY manual entitled “How we defeated Shell” to encourage others to take on some of the biggest companies in the world. Available in Spanish, English and Dutch, the 70 page set of instructions is aimed at inspiring NGOs and lawyers, in particular, to take on these kinds of climate cases.

HOW WE DEFEATED #SHELL - A peek behind the scenes with @milieudefensie: “What was considered impossible 5 years ago has become reality today.” The victory in our fight to #StopShell explained ??https://t.co/rNTtiJZrd4#COP26#ClimateCase

Describing themselves as a “big group of ordinary people who thought things could and should be done differently,” they say that if one case can be won against a major fossil fuel company, then two can be won or even hundreds.

Our system is 'addicted to fossil fuels'

Similar climate cases have already been announced in countries including France, Germany and Italy. The more cases that are won, the group says, the greater the chance that major polluters will be compelled to become more sustainable.

Earlier this week, Global Witness revealed that the fossil fuel industry had the biggest delegation at the UN climate conference in Glasgow. They found that 503 people with links to fossil fuel interests had received accreditation.

The NGO believes that their influence is part of the reason 25 years of global talks on climate change have not delivered any real cuts to emissions.

“The way that our governments and our whole system is addicted to fossil fuels causes so many problems,” says researcher and campaigner for Milieudefensie Nine de Pater, “and we are exposing this by doing these lawsuits.”

“We are all doing something, and it might not be enough,” but she adds, by taking these cases to court, by building campaigns, they are highlighting the actual actions of companies like Shell.

“What are they doing not what they are saying, it helps to build a case and helps to bring down the fossil fuel industry.”

What happens if you don’t win?

The case in the Netherlands took years of work, research and the involvement of 17,000 ordinary citizens. The group acknowledges that it wasn’t easy and says finding a good lawyer is essential for any climate case.

Milieudefensie’s Roger Cox says the key is to recognise that “climate change is about human rights”. To be successful, these cases need to show that human rights are being threatened.

When you start a case like that, you also know that you might lose, but when you lose, there's always something to learn.

And even if they fail, Cox says, the work is valuable for those looking to take legal action against fossil fuel companies like Shell in the future.

“When you start a case like that, you also know that you might lose, but when you lose, there's always something to learn,” he explains.

“You're also creating a body of work that even if cases are lost, somebody else can try to see if they can achieve the achievements that were not successful.”