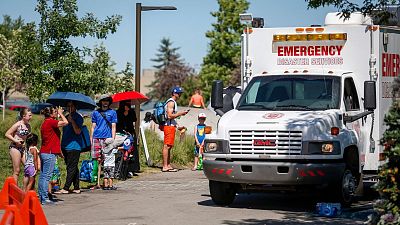 The patient was diagnosed soon after the Canadian heatwave.   -   Copyright  Jeff McIntosh/The Canadian Press via AP
By Lottie Limb  •  Updated: 11/11/2021

A Canadian woman has become the first patient in the world to be diagnosed as suffering from ‘climate change’, after she developed breathing difficulties following an historic heatwave.

Working at the emergency department of the hospital in British Columbia, Dr Kyle Merritt said his diagnosis of the woman, in her 70s, was his attempt at processing what he was seeing.

Hundreds of people died as temperatures soared to nearly 50C in June, a Canadian record. The province’s coroner ruled that 570 of those sudden fatalities were ‘heat-related’. Around the world, WHO estimates that climatic changes cause more than 150,000 deaths a year.

But despite the overwhelming statistics, this is thought to be the first time climate change has been given as a cause of suffering by a medical professional.

“If we’re not looking at the underlying cause, and we’re just treating the symptoms, we’re just going to keep falling further and further behind,” Dr Merritt told the Glacier Media.

In this case, the woman has asthma, diabetes, and some heart failure, and lives in a trailer with no air conditioning. “All of her health problems have been worsened,” the emergency doctor explained, “and she’s really struggling to stay hydrated.”

Scorching temperatures exacerbated wildfires in the region, causing the air quality to become 43 times worse than ‘acceptable’ levels throughout July and August.

“We’re in the emergency department, we look after everybody, from the most privileged to the most vulnerable, from cradle to grave, we see everybody. And it’s hard to see people, especially the most vulnerable people in our society, being affected. It’s frustrating,” said Dr Merritt.

How helpful is this as a new diagnosis?

“I think it's really great that medical professionals are starting to bring visibility to the fact that climate change is actually a health hazard,” she tells Euronews Green.

“Doing things like this and doing better studies that can help us attribute deaths to climate change is incredibly important because that is what will ultimately allow us to quantify the health dimension of climate change.”

Romanello, whose research exposed an unabated rise in the health impacts of climate change, adds “we have a very big iniquity in the type of data we collect,” around the world.

For Dr Merritt and his colleagues, their experience of the climate crisis as a health crisis in Canada has led them to launch an initiative called ‘Doctors and Nurse for Planetary Health’.

The healthcare professionals are working to “better protect human health by protecting the planet.”