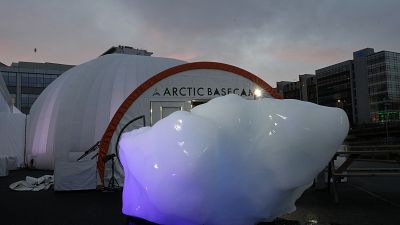 A huge four-tonne iceberg from Greenland has been brought to Glasgow during COP26, as a reminder of both the urgency and reality of the climate crisis.

Transported over by Arctic Basecamp, a UK science communications platform, the ice has already started melting in the mild Scottish weather.

"We are trying to remind delegates that the Arctic is in crisis," says Gail Whiteman, the founder of the platform.

"While they are inside trying to deal with economic realities or geopolitical tensions, this iceberg is out here melting away."

How fast is the ice sheet melting?

Throughout COP26 Arctic Basecamp has distributed bottles, filled with water from the melted ice sheets, to delegates as a "bottled warning" of the scale of the problem.

According to Whiteman, the equivalent of 17 million bottles are melting from the Greenland ice sheet every second.

Why is the Greenland ice sheet important?

The Greenland ice sheet is the second largest on Earth but has been losing 247 billion tons of ice per year over the last decade.

Not only will sea levels rise as the ice sheet melts but, on our current trajectory, cities like New York, Miami and Dhaka could end up underwater.

The ice sheets also influence weather patterns worldwide and have the ability to alter the course of storms. As the global temperature rises and the ice caps continue to melt, this will only lead to more of the disastrous weather we have seen throughout 2021.

But the future isn’t set in stone and there’s still time for world leaders to push for positive change.

Watch the video above to learn more about the scale of the problem.