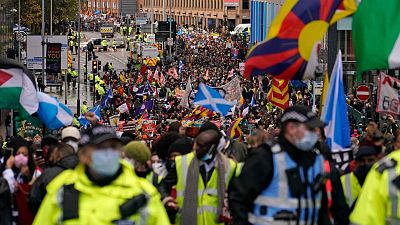 COP26 action wasn't just unfolding in host city Glasgow today, but across continents. Protests all over the world took place, urging world leaders to do more to tackle the climate crisis.

"We are taking to the streets across the world this weekend to push governments from climate inaction to climate justice," said Asad Rehman, a spokesperson for the COP Coalition.

Here are five key takeaways from day six of the UN climate conference, which was also Nature Day:

1. Tens of thousands march through Glasgow for second consecutive day

An estimated 100,000 protesters braved torrential rain in Glasgow on Saturday to take part in worldwide demonstrations against climate inaction at COP26, according to organisers.

The giant rally came after tens of thousands of young people took to the streets of Glasgow on Friday to denounce inaction and greenwashing at the global climate summit.

"Our world is under attack, stand up fight back," they chanted.

"We're clear that warm words are not good enough - and that the next week of talks must see a serious ramping up of concrete plans," said Scottish activist Mikaela Loach at the protest.

Jill Bird, a 66-year old came all the way from Bristol to ask rich countries to live up to their promise of providing $100 billion (€86 billion) annually to developing nations.

Security was ramped up in Glasgow and many city-centre shops closed for Saturday's march.

However, the action on Saturday did not just unfold in Glasgow but across continents.

From Sydney to Paris, including Istanbul, tens of thousands of protesters took to the streets all over the world this Saturday.

Organisers said over 250 events took place around the world, in addition to a digital global rally.

Australia kicked off a series of global climate marches, with protesters in Sydney and Melbourne dressed as lumps of coal or Prime Minister Scott Morrison, a vigorous defender of the mining industry.

They labelled the talks as "a sham" and their national leader "an absolute embarrassment."

In London, about 1,000 people gathered in iconic locations, from the Bank of England to Trafalgar Square. Some placards read: "Less talk more action" and "No More COP outs."

In Paris, hundreds of people rallied in front of the Paris City Hall, carrying a giant banner reading, "Climate inaction = crimes against the living."

Protesters also hung a sign to the Olympic rings adorning the city hall that said, "Inactive at C026: Dying in 2050."

There were also protests in the Global South, including in the Philippines.

Swedish youth activist Greta Thunberg's comment on Friday that COP26 was a "failure" has grabbed media headlines all over the world.

But some say it's too early to rush to judgement about the multilateral talks.

"Let's call out bad actors, speak truth to power and not allow politicians to make empty promises," the expert said.

"But let's NOT throw out the baby with the bathwater. The COP process is the only viable multilateral vehicle we have right now for global climate action," he added.

4. Small-scale farmers in the spotlight thanks to Idris Elba star power

Today was Nature Day and the summit turned its focus to issues such as land use and sustainable agriculture.

British actor Idris Elba used his star power to draw attention to the role of small-scale farmers, who produce 80 per cent of the food consumed worldwide.

"One day, we'll go to Sainsbury's or Marks & Spencer and food will not be there," he warned at a UN event on sustainable agriculture.

To those who were wondering why he was taking part, Elba, who is a UN Goodwill Ambassador, said it was because "this conversation around food is something that needs to be really amplified, and one thing I’ve got is a big mouth."

"The supply chain is going to be damaged if we don't figure out what to do," Elba insisted.

Ugandan climate activist Vanessa Nakate, 24 told the panel climate change was already causing hunger for millions around the world, including in her own country.

She said a shift from meat to plant-based diets could help save millions of tons of greenhouse gas emissions each year, while freeing up more land that’s currently used for animal feed.

A coalition of 45 countries pledged on Saturday "urgent action and investment to protect nature and shift to more sustainable ways of farming," the UK COP26 presidency has said.

About one-quarter of the world’s greenhouse gas emissions come from agriculture, forestry and other land-use, the statement noted, highlighting the urgency to act for more sustainable food systems.

The pledge included a commitment to "leveraging over US$4bn billion of new public sector investment into agricultural innovation," according to the statement.

An environmental group welcomed the pledge but urged more nations to join the coalition.

"We cannot phase out food, like we can fossil fuels and therefore we welcome the Policy Action Agenda for transition to sustainable food and agriculture," said Joao Campari, Global Food Practise Leader at WWF.

“Now we need all countries to endorse this action agenda and utilise the action plan," he added.

Vanessa Nakate: 'The Global South is not on the front page'

COP26 is a PR event to fight for the status quo, says Greta Thunberg