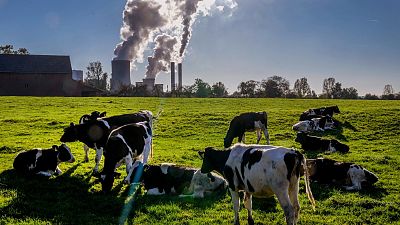 Global carbon emissions are returning to near 2019 levels after dropping by 5.4 per cent during the pandemic, according to a group of scientists who analyse greenhouse gases.

Emissions are projected to reach 36.4 billion tonnes of carbon dioxide this year, an increase of 4.9 per cent since the pandemic, the Global Carbon Project said in a new study.

Coal and gas emissions in 2021 are expected to rebound above 2019 levels, the scientists said, while emissions from oil are still below their 2019 levels.

While projected emissions in the United States and European Union were below their 2019 levels, in China they were projected to be 5.5 per cent higher in 2021 compared to 2019 levels.

The report said the concentration of carbon dioxide in the atmosphere is 49 per cent above pre-industrial levels globally.

Despite declining CO2 emissions from 2014 to 2016, "China has shown robust emissions growth since 2016, including through most of the COVID pandemic," said Jan Ivar Korsbakken, a senior researcher at Oslo's Centre for International Climate Research, and an author on the carbon budget paper.

The authors projected that China's coal emissions would exceed their 2013 peak in 2021. They said that India's coal use was expected to grow around 15 per cent in 2021, showing no slowdown in coal use.

The report comes as countries discuss the climate crisis at the United Nations' climate change conference in Glasgow, the COP26.

Chinese President Xi Jinping has been criticised for not attending the climate conference, even though China is the world's top carbon dioxide emitter.

Scientists have warned that the Paris climate agreement goal to limit warming to 1.5 degrees Celsius is out of reach unless rapid changes occur.

What is the 'carbon budget', latest term coming out of COP26 talks?