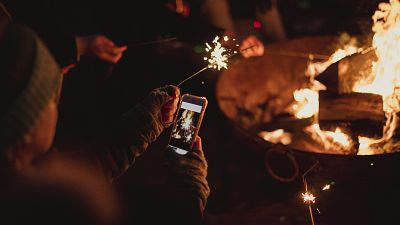 Bonfire Night is celebrated in the UK on November 5th every year.   -   Copyright  DEAN HINDMARCH/SOLSTOCK/Getty
By Lottie Limb  •  Updated: 04/11/2021

Bonfire season is upon us, with communities across Europe gathering to burn the deadwood of autumn and huddle close as the nights get colder.

In the UK, this happens in one big pyrotechnic display called ‘bonfire night’. As any Brit could tell you, it occurs on November 5th - though the reasons why it’s remembered have become less clear with time.

Otherwise known as Guy Fawkes Night, it marks the anniversary of a failed plot to blow up the Houses of Parliament in 1605. The unfortunate Fawkes and his co-conspirators were found with dozens of barrels of gunpowder, and so fireworks are lit in celebration of the averted explosion.

An effigy of Fawkes - called a guy - is often thrown on the fire too. But the UK government has issued a warning about what materials can be burned this year, as the environmental cost of bonfires stacks up.

Though rules vary across the continent, the risks from air pollution caused by bad bonfires apply wherever you are.

What is safe to burn?

Only clean, non-commercial waste - like paper, untreated wood and cardboard - should be burned to avoid harmful air pollution.

“Bonfires are not to be used for a seasonal clear-out of your rubbish,” says Sam Pickard of the Environment Agency. “It is not an excuse to get rid of difficult to dispose of rubbish by burning it yourself or asking others to do it for you.”

Local waste disposal sites and recycling centres should be used instead.

A lot of bonfires will be made from garden waste. While burning might seem like a safe option, garden offcuts produce up to 30 times more particulate pollution than burning logs in a stove per kilogram burned, a team of French scientists have found.

It more closely resembles wildfire smoke, which is linked to a range of health problems. So composting garden waste is a much better solution.

How can you protect wildlife?

For hedgehogs and other animals, large stacks of wood look like a great place to hunker down and hibernate.

To stop these creatures meeting a cruel end, start by building your bonfire on open ground - instead of leaf piles where they could be living already.

As the night gets closer, move the materials onto a different patch - or burn them in smaller piles if you’re just looking to clear the land rather than create a spectacle.

Before you set the stack ablaze, make sure to check it all over with something soft-ended for hedgehogs, which tend to hide in the centre and towards the bottom. Listen for a hissing sound which is the noise a hedgehog makes when it’s in distress.

Finally, when you’re ready to start the fire, light it from one corner rather than the centre - giving any trapped animals a chance to escape.