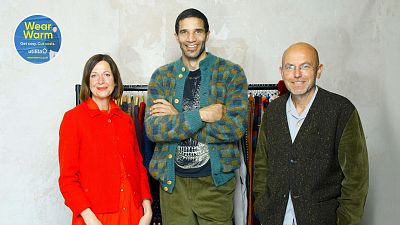 13 million UK households are being told to “put a jumper on” instead of heating their homes above 21 degrees C.

The Wear Warm campaign was launched after research by Utilita Energy - the only energy company in the UK created to help households use less energy - revealed that almost half of the nation’s homes are heated to 24 degrees centigrade for half of the year.

Both the Energy Saving Trust and the World Health Organisation (WHO) recommend heating your home no higher than 21 degrees celsius in the winter.

But with 48 per cent of British homes being heated three degrees higher, millions more tonnes of carbon dioxide are being emitted unnecessarily each year.

Get cosy for not so costly

The campaign will feature in 657 charity shops around the UK.

Shoppers will be able to get their hands on a selection of preloved winter garments - from jumpers to fleeces - while staying on top of their energy bills.

“One of my personal bugbears is seeing people sitting at home in the winter, wearing a T-shirt, with the heating cranked up,” says James, who has been involved with numerous sustainability programmes since retiring from professional football.

“There’s absolutely no sense in it, and now we have the evidence to reveal the impact that this type of behaviour is having on the planet and the pocket.”

Maria Chenoweth, CEO of TRAID (Textile Reuse and International Development), has already signed up 12 of her charity shops to participate in the Wear Warm campaign.

“The UK is so fortunate to have a thriving network of 11,200 charity shops, on nearly every high street,” she says. “Let’s use them to stay warm!”

“TRAID’s charity shop rails are packed with affordable, high quality winter wear selected expertly by our sorting team. So, when your home starts to feel the chill, reach for your wardrobe instead of turning up the heat.”