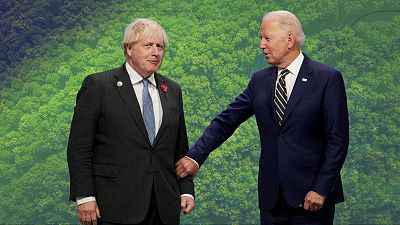 The first major deal of COP26 is due to be signed later today (2 November), as more than 100 world leaders commit to ending deforestation by 2030.

In an unprecedented move, leaders representing over 85 per cent of the planet’s forests will promise to halt and reverse deforestation and land degradation.

The majority of countries home to the Amazon Rainforest - the world’s biggest forest - have signed the agreement. Only Bolivia and Venezuela have not joined the pledge, but Brazil (where the majority of the Amazon is found) has joined the commitment.

This is set to be the biggest measure ever taken to preserve the world’s forests. The countries committing to the Glasgow Leaders’ Declaration on Forest and Land Use represent over 33.7 million square kilometres of forests.

The private sector funding is coming from more than 30 financial institutions, such as Aviva, Schroders and Axa. These companies will also promise to eliminate activities linked to deforestation.

The money will be used to support activities in developing countries, particularly to help restore degraded land, tackle wildfires, and support Indigenous communities.

UK Prime Minister Boris Johnson will refer to the pledge as “a landmark agreement to protect and restore the earth’s forests.

“These great teeming ecosystems – these cathedrals of nature - are the lungs of our planet,” he is expected to say at the event. “Forests support communities, livelihoods and food supply, and absorb the carbon we pump into the atmosphere. They are essential to our very survival.

“With today’s unprecedented pledges, we will have a chance to end humanity’s long history as nature’s conqueror, and instead become its custodian.”

Watch the full interview with Euronews science correspondent Jeremy Wilks in the player above.

However, critics have highlighted a lack of accountability with this new measure.

“While the Glasgow Declaration has an impressive range of signatories from across forest-rich countries, large consumer markets and financial centres, it nevertheless risks being a reiteration of previous failed commitments if it lacks teeth,” says Jo Blackman, Head of Forests Policy and Advocacy at Global Witness.

“If global leaders are serious about stopping forest destruction then they must back up today’s announcements with a commitment to bring in strong and binding national legislation that makes it illegal for companies and financial institutions to fuel deforestation,” she continues.

She highlights the New York Declaration on Forests from 2014, where governments committed to cut deforestation by 50 per cent by 2020 and stop it by 2030. The 2020 target was missed and we are off the pace for the 2030 goal too.

Why does protecting forests matter?

Forests absorb around a third of global CO2 emissions, but we lose an area the size of 27 football pitches every minute.

Almost a quarter of global emissions (23 per cent) come from land-use activities like logging, deforestation and farming. This is why it’s more important to preserve existing forests than plant new ones.

Mitigating forestry loss and preventing land degradation is vital in limiting catastrophic levels of global warming, while simultaneously safeguarding the futures of the 1.6 billion people (nearly a quarter of the world) whose livelihoods depend on forests.

“Norway will continue and further develop its International Climate and Forest Initiative at high levels until 2030, and we’re excited to be part of a growing coalition of donors and companies mobilising to reduce deforestation and enable a just rural transition.

“I am particularly pleased that we are joining forces to secure Indigenous Peoples' rights and increase the recognition of their role as forest guardians.”

The agreement will bring together countries around the globe, from every populated continent, each committing to tackle forest loss in a serious way.

“Indonesia is blessed as the most carbon-rich country in the world on vast rainforests, mangroves, oceans and peatlands,” says Joko Widodo, President of Indonesia.

“We are committed to protecting these critical carbon sinks and our natural capital for future generations.

“We call on all countries to support sustainable development paths that strengthen the livelihoods of communities - especially indigenous, women and smallholders.”

Which countries have signed up to the Glasgow Leaders’ Declaration on Forest and Land Use?

These are the 101 countries and parties which have signed the declaration, as of 2 November.

“We welcome the announcement at COP26 of the Joint Statement on Advancing Support for Indigenous Peoples and local communities that has raised to an unprecedented level their visibility as a climate solution,” says Tuntiak Katan, Coordinator of the Global Alliance of Territorial Communities, representing communities from the rain forests of Africa, Latin America and Indonesia.

“At the same time, we will be looking for concrete evidence of a transformation in the way funds are invested.

“If 80 per cent of what is proposed is directed to supporting land rights and the proposals of Indigenous and local communities, we will see a dramatic reversal in the current trend that is destroying our natural resources.”

What is the 'carbon budget', latest term coming out of COP26 talks?

Queen Elizabeth gets serious with world leaders at COP26