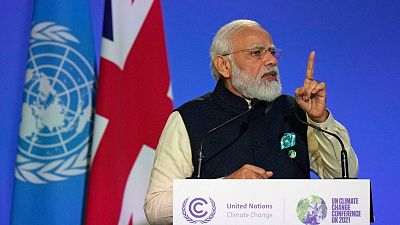 The Indian Prime Minister’s announcement that the country will reach net zero emissions by 2070 has met a mixed reaction from COP-watchers.

While many have welcomed the unprecedented pledge - accompanied by a suite of new 2030 targets - others have lamented that it is out of step with Western countries’ 2050 aims.

But some critics are sorely lacking historical and geographical context. As environmental campaigners have pointed out, it is “deeply unfair” to blame middle-income countries like India and China for the climate crisis.

And as India only gained independence from Britain in 1947, a great deal of its pollution is really the coloniser’s responsibility.

“The global north has a moral and historic obligation to act first,” says Daniel Willis, climate campaigner at the Global Justice Now group.

“We in the rich world have built our economies by fuelling the climate crisis, reaping the benefits of carbon emissions while destroying the planet. This is fundamentally our problem to address, but we have repeatedly broken our own climate promises.”

COP26 is not the first time this misleading blame game has come up. India and China are undoubtedly both major emitters, with China responsible for 28 per cent of carbon emissions and India 7 per cent, ranking them first and third in the world.

But as the per capita analysis shows, they slip down the rankings when you account for their huge populations. Between them, China and India are home to more than a third of the planet’s people -36 per cent in total.

And tallying up their territorial emissions belies the Global North’s role in their carbon-intensive productions.

The US, UK, Japan, France and Germany in particular are increasingly outsourcing key parts of their industrial processes.

Consider how many items you own which say ‘Made in China’ or clothes you’ve bought which were manufactured in India; the emissions involved in their creation would have been counted as China and India’s responsibility.

India’s 2070 pledge is the first time the country has set a net zero target. In his COP26 speech yesterday, PM Narendra Modi called for the increased ambition to be matched by increases in climate finance.

Rich nations pledged to provide $100 billion a year in climate finance by 2020, but it was recently revealed that they’re not on track to honour the promise until 2023.

“India understands and shares the pain of other developing countries"

“India understands and shares the pain of other developing countries,” said Modi.

He said he expects developed nations to make $1 trillion (€863 billion) available as soon as possible, enabling developing countries to speed up their carbon cutting journeys and adapt to increasingly extreme climate events - a call already rejected by the UK today.

Campaigners say the UK and US urgently need to step up on the issue of climate finance, heeding vulnerable countries' calls for support and ignoring fossil fuel companies intent on “suing their way out of climate action.”