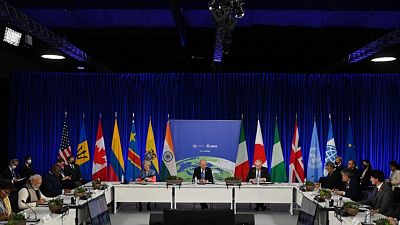 With introductions out of the way, Tuesday saw some of the first big commitments from world leaders at the Glasgow climate summit.

Here are six of the biggest takeaways from day two of COP26:

First to be announced was an ambitious pledge by more than 100 world leaders to stop and reverse deforestation by 2030.

Together they represent over 85 per cent of the world's forests and have promised to halt and reverse deforestation and land degradation. A majority of the countries that are home to the Amazon Rainforest - including Brazil - were part of the pledge with only Bolivia and Venezuela absent.

Supported by nearly €16.5 billion in public and private money, it is set to become the biggest measure ever taken to protect the planet's forests.

A huge announcement from the South American country. This could be a major catalyst in encouraging other leaders to move more quickly.

But Colombian President Duque took the ambitious pledge even further by saying that his country would commit to protecting 30 per cent of its territory by 2022 - eight years earlier than previously planned.

He said that it would have to be backed by green finance and, with major banks in the UK, EU and US earning more than €15 billion from deforestation activities since 2015, it is a monumental task.

"The pledge that we have announced today from public money will not match or come close to matching the amount of money that's currently being invested in the problem of causing deforestation," he said.

"There's no doubt that we need to address the supply chains and investment in the private sector."

More than 100 countries, including EU nations, pledged to curb methane emissions by 30 per cent by 2030.

It was the first time in recent history that COP has held a major event on methane and 15 of the world's biggest emitters were among those who signed up.

The potent greenhouse gas is responsible for an estimated 30 per cent of global warming since the industrial revolution according to European Commission President Ursula von der Leyen.

"Today's launch of the Global Methane Pledge is also critical to keeping 1.5C alive. I am proud that COP has played host to a historic pledge which will play a vital role in limiting up to 0.2 degrees of warming across the next decade," says COP26 President Alok Sharma.

Pledges for cash flowed too, both from governments and the private sector.

The Bezos Earth Fund promised $2 billion (€1.72 billion) to tackle climate change through landscape restoration and the transformation of agricultural systems.

The Agriculture Innovation Mission for Climate (AIM for Climate) also announced $4 billion (€3.4 billion) for climate-smart agriculture and food systems over the next five years.

The initiative is led by the US and UAE and has the support of more than 30 governments.

Host nation Scotland also became one of the first countries to pledge funding for the Global South for the effects of climate change. A "pioneering" £1 million (€1.2 million) was put forward for climate loss and damage.

At #COP26 we must ask - ‘who are we not hearing from’ and elevate their voices. ?

?we launch the #GlasgowClimateDialogues - with calls to climate action from the global south

SNP Environment Minister, Mairi McAllan called on other countries to follow Scotland's lead in acknowledging that actions by those in developed countries are having an impact elsewhere.

But despite the good news, climate activists warned this might not be enough to keep global warming below 1.5C.

Some pointed to accountability problems with world leaders’ commitments, while others said they fell short of previous goals.

In Reference to the pledge to cut methane made today, Greenpeace says it "dodges what's needed."

Head of the organisation's delegation at COP26, Juan Pablo Osornio says it needs to be "the start and not the finish of the ambition on cutting this potent greenhouse gas."

"The IPCC says we need to cut all emissions in half by 2030 if we hope to keep global temperature rises within 1.5C. If we drastically slash fossil fuels we’d cut methane and carbon emissions at the same time, and have a much better chance of meeting that goal."

Osornio adds that all roads point to "the need to eliminate fossil fuels from our energy system and phasing out industrial meat and dairy from our diets as soon as possible."

Meanwhile, the British presidency faced criticism about accessibility and inclusiveness at the conference.

Civil society groups have complained of "unprecedented restrictions" to negotiations. The UK presidency was awarded Climate Action Network's 'Fossil of the Day' award yesterday for failing to organise an inclusive COP. They won the award in partnership with the UNFCCC secretariat, for "their exceptional organisation."

??#COP26 UK Presidency for failing to make it the ‘the most inclusive COP ever’

?? Australia - a close 2nd, for lack of ambitious NDCs, 3 new coal projects and no plans to phase out fossils

After waiting for two hours, she was offered a ride in a shuttle that was not wheelchair accessible.

6. Time for diplomats to hammer out details

Heads of states and governments are leaving Glasgow as the world leaders' summit concludes today. After outlining their national commitments and setting out broad outlines of agreements, they will let diplomats and other government officials hammer out the details.

"The clock on the doomsday device that I talked about is still ticking but we've got a bomb disposal team on-site and they are starting to snip the wires," said UK Prime Minister Boris Johnson.

He concluded with a message to negotiators during the rest of the two weeks, "the leaders of the world may have left COP now but the eyes of the world...are on you."

How is the pharmaceutical industry trying to become more green?