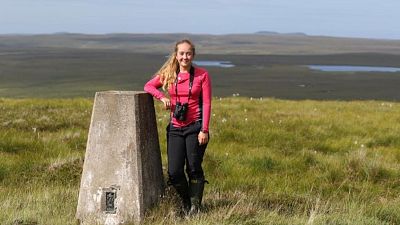 Throughout COP26, we’re going to be profiling interesting people we meet here in Glasgow.

From volunteers to politicians to activists to scientists, we’ll bring you the breadth of people here at the UN climate summit.

Intern for the RSPB (Royal Society for the Protection of Birds).

What do you do?

I was raised in the Highlands of Scotland, and now I work on the RSPB’s Forsinard Flows Nature Reserve in Caithness and Sutherland in Scotland.

I'm here to try and represent the youth voice when it comes to peatlands.

Peatlands are an incredibly under-appreciated habitat. But they’re so important for so, so many reasons, as well as their own integral right to exist and be protected.

They do so much for us in terms of ecosystem services, but so many people just don't know how important they are. Even growing up near peatlands, you don't hear much about them.

Peatlands are very much a place where, until you go and explore for yourself, you don't see all the magic that's happening down on the ground. So I really just wanted to come here, and try to spread the word about how amazing they are, and get people talking about them.

What are your hopes for COP26?

I really hope that policymakers will be able to make some firm commitments to protect peatlands and other environments.

As someone from Scotland, what does it mean for COP26 to be here in Glasgow?

It's really incredible. I think it gives Scotland and the rest of the UK this opportunity to show everyone else what we're going to do and how we're going to lead the way.

I'm not sure that's happening at the moment, but I'm hoping that we'll pull through and be able to show exactly what we want to happen and how it should happen.

What’s the one thing you hope people take away from COP26?

We're here because there's a climate emergency. But there's a nature emergency going on as well.

And actually, they're intertwined. It's not just one or the other. By tackling the nature emergency - for instance where we've got biodiversity loss - we're also going to help the climate.

It's not just one or the other, we can all work together towards the same goal.

And it's not just regional or national issues. It's a global thing, as everyone knows. So while we might make policies here in the UK, just for the UK, we need to try and encourage others to make those same decisions and vice versa.