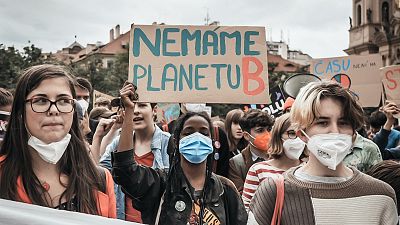 Euronews Green is proud to be partnering with Youth and Environment Europe over the next several months to platform underrepresented and marginalised people in the climate movement. In our first instalment, we're introducing 19-year-old Vivien Hamzová.

Vivien Hamzová is a volunteer for Fridays for Future in the Czech Republic. She became an activist when she realised the direction the world is heading. Here she explains how the climate crisis affects half her family in the Global South compared with where she lives in the Global North.

It has not been long since I started caring about the environment. It was actually my classmate and friend Julia, who inspired me to join the climate movement.

Why did I decide to get involved? I suppose there was a moment when I realised that the world is heading in a really bad direction.

And I wanted to do something about it. For me, and for others.

I study photography. An artist's work is always influenced by the society and environment in which the artist lives or experiences something. My work is often influenced by my mental health and the events happening around me, whether small and personal or big world events.

I have decided to join the local chapter of Fridays for Future, since it is an organisation that shares my values and principles, and so far it has been a great experience. I am involved in all the events that FFF is organising. It is a very accepting place where everybody is equal and everybody is welcome.

It does not matter what my background is or where I come from. What matters is who I am and what I do now.

It has shown me that it does not matter what my background is or where I come from. What matters is who I am and what I do now.

Why we need to change now

Half of my family lives in Sudan and the situation there is already much worse than what we experience in Europe. Water is a scarce resource, and at the same time the political situation is not in the state where they would be focusing on environmental issues.

The situation in Europe is different. The consequences of the climate crisis are not yet manifesting themselves in such magnitude and there is enough prosperity here to put resources into the fight.

The situation in Europe is different. The consequences of the climate crisis are not yet manifesting themselves in such magnitude.

But this is not the case right now. And that is why we go to the streets and protest. Because the change needs to happen now. We depend on social justice even though we protest against climate justice.

Everything is connected - environmental protection, climate justice and human rights are the same fight.

There has to be a certain balance between nature and man in the world, which was disturbed a hundred years ago by mankind's carelessness towards nature. It is already too late to save the planet and there must be a big change, and a quick one at that.

The climate must become one of the world's foremost problems and it must be addressed immediately.

When I’m feeling down, the best remedy is to do something

When I went to my first climate strike one month ago, I felt like I did something important, for the first time in my life. It was a really emotional moment for me.

I really wish that all young people got involved in environmental issues. It is our future that is at stake.

We are living in a world where decisions are being made right now, by people who will not necessarily live in that world... And that is not right. We should not let other people ruin our chances for a good future.

How is Kosovo's 'city of power plants' being transformed?

‘If COPs were useful, there would be no need for 26’