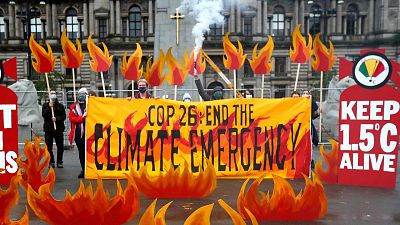 Protesters around the world have taken to the streets to demand immediate action ahead of the 2021 United Nations Climate Change Conference.

COP26, which begins on Sunday, will bring together more than 100 world leaders for a 12-day-long convention in Glasgow.

But with the devastating effects of the climate crisis mounting, campaigners in cities across the world have been making their feelings known.

"I really hope that this year we start taking action on the Paris agreement and it turns into something that isn't just about all talk and no action,” says Sharona Shnayder, one of many climate activists who participated in a large-scale protest in Tel Aviv.

“We really need to take bold action on the climate crisis."

This feeling was shared in Stockholm, where Greta Thunberg expressed her concern that the upcoming climate talks were unlikely to "lead to big changes".

“Every one of these meetings is crucial for the Paris agreements to work. But we’re going to have to keep pushing.”

It was a similar story in Milan, Paris and London, where thousands of protesters urged world leaders to take immediate action.

“I think the message to COP is that we should stop looking at the climate crisis as the end of something,” says Brianna Fruean, who joined activists outside the Lloyd’s of London offices.

“We need to be ambitious and really think of a bigger picture where our Earth is at a healthy state and we are able to sustain the planet.”

COP26 will see governments thrash out further commitments to limit the warming of the Earth to a maximum of 1.5 degrees Celsius, as laid out in the 2015 Paris climate accord.

Many world leaders are hoping to persuade major developing economies to do more to cut their carbon emissions, while asking the rich to cough up billions to help poorer countries adapt to climate change.