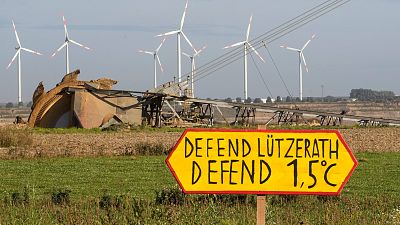 Ahead of the international climate change conference COP26 in Glasgow, German climate activists have been pressuring Berlin to exit coal earlier than scheduled.

At the Garzweiler opencast lignite pit, they took things a step further, blocking the movement of giant bucketwheel excavators.

Also at a nearby forest, they built tree houses to try to stop the expansion of the pit.

Euronews reporter Hans von der Brelie joined them in the tree-tops for an exclusive interview.

"It's easy for them to cut the trees and start digging. But it's less easy if there is a tree with a tree-top house and a human being inside," said Lotte, a climate activist.

"Cutting the tree would expose us, humans, to a life-threatening danger,” she says.

Angela Merkel's government had planned to phase out coal by 2038.

A recent draft paper of the current coalition negotiations between the Social Democrats, Greens and Liberals says that could be moved up to 2030.

The European Commission has pushed for member states to phase out coal to meet Europe's climate targets.

Some large coal-producing countries, such as Romania and Poland, have pointed to Germany's exit by 2038 as an example of delaying the phasing out of coal.

The full report by Euronews journalist Hans von der Brelie on Germany's painful coal exit is on our programme WITNESS.