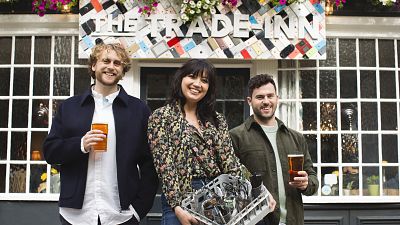 One British pub is allowing customers to pay for pints with old, unwanted tech.

At the Trade-Inn in London, people can trade food and drinks for almost 14,000 kinds of electronic devices, including old iPhones, which are then repaired by a tech company for future use.

It comes as new data reveals the UK is forecast to be Europe’s biggest producer of electronic waste, overtaking current global leader Norway by 2024.

Model and environmentalist Daisy Lowe was the first customer at the week-long takeover of The Prince Arthur in Shoreditch, which runs until Saturday, including International E-Waste Day today.

The UK is forecast to be Europe’s biggest producer of electronic waste, overtaking current global leader Norway by 2024.

“I was shocked when I found out the environmental impact that just holding onto old phones can have, let alone throwing them away,” she says. “It’s important that when we’re finished with our old tech, it’s put back into circulation for someone else to use.

Spring is behind the boozy bonus scheme, a new tech recirculation service which aims to tackle the 1.6 million tonnes of electrical waste the UK produces each year – the equivalent of eight pints per person.

Tackling a mountain of e-waste

Electric waste (e-waste) consists of all discarded devices, including smartphones, TVs and fridges. Much of it is incinerated, landfilled or shipped illegally overseas, often at a devastating cost to the local environment.

While the chunkier stuff tends to get thrown out first, the average UK household hoards around 20 old and unused devices, the government’s Environmental Audit Committee report found.

Much of it is incinerated, landfilled or shipped illegally overseas, often at a devastating cost to the local environment.

Per UK adult, e-waste is set to rise from 23.9kg to 24.5kg by 2024, according to Spring’s tracking of Global E-Waste Monitor reports over the last few years. By that time, Norway will be the second-worst offender, followed by Denmark, Switzerland and the Netherlands.

“Leaving an unused device in a drawer is as bad as throwing it in the bin,” explains Spring co-founder James Seear. “That’s because rather than it being reused by someone else, it’s taken out of circulation and needs to be replaced with something new.

“As the tech in our homes grows, so does a mountain of electronic waste, which is having a catastrophic impact on the environment.”

In another move to get people giving up gadgets in a productive way, the same company has launched kiosk-style ‘pods’ in supermarkets across UK cities, including Birmingham, Leeds and London. Shoppers are using them to sell unwanted devices, which then get repaired before they are sold on via third-party sellers.

Welcome to the Australian village powered by the sun