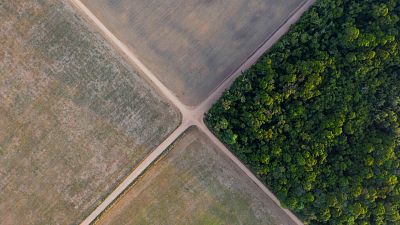 Around 195 countries signed a pledge on Wednesday to come up with an “ambitious and transformative” plan to prevent our planet from losing its biodiversity.

Meeting as part of the United Nations Biodiversity Conference, also known as COP15, they took on what has been called the defining challenge of this decade.

Named after the city in China where this conference is taking place, the Kunming Declaration signals a change in momentum. It is hoped that this first part of the summit will allow countries to come up with an agreement similar to the Paris Accords - but for the protection of biodiversity rather than climate change.

That agreement is expected to be finalised at the second half of the conference next year.

As the first half of COP15 comes to a close, we take a look at why this often overlooked aspect of planetary protection deserves more global attention in the coming decade.

Biodiversity is a measure of all the living things on our planet.

It covers everything from genetic diversity to species, communities and ecosystems such as forests or oceans. Interaction between all of these different levels of life, from the smallest microorganisms to the king of the ocean, the blue whale, is what has made life on Earth possible for millions of years.

Why is biodiversity so important?

The “safe limit” for biodiversity loss is 90 per cent. It was set in 2009 by the Planetary Boundary Guidelines which define the environmental limits within which humanity can safely operate.

Below 90 per cent, ecosystems would not have enough variety of plants, animals and all living things to properly function. Described as an “ecological recession”, experts say this would lead to shortages in energy, food and materials from crop failures.

Below 90%, ecosystems would not have enough variety of plants, animals and all living things to properly function.

We could no longer rely on many of the natural systems that support our everyday life. It is clear, then, that keeping our biodiversity intact is important to planetary survival - including the survival of human civilisation.

Protecting biodiversity is important, not just for the beautiful natural spaces and wild animals but for the knock-on effects that losing it can have, explains Gavin Edwards, global coordinator for the New Deal for Nature and People at WWF International.

“It matters for human development, it matters for access to clean water, to sustainable nutritious food, and a whole host of other reasons as well,” he says.

What is the state of global biodiversity?

By using and abusing more resources than ever before, humans are putting increasing pressure on the complex balance of ecosystems. The world’s biodiversity has now fallen below the ‘safe limit’, researchers at London’s Natural History Museum warned ahead of the conference.

Some countries are faring better than others. The UK, for example, is thought to have just 53 per cent of its biodiversity left - well below the global average and that of China, the host of COP15.

“Biodiversity loss is just as potentially catastrophic for people as climate change, but the solutions are linked,” says Professor Andy Purvis, a researcher at the Museum.

Biodiversity loss is just as potentially catastrophic for people as climate change, but the solutions are linked.

He adds that stopping further damage to the planet requires a big change but there is still time for governments who hold the economic, legal and political power to act.

“Muddling through as we currently are doing is nowhere near enough to halt, let alone reverse, this devastating decline in biodiversity.”

Why is COP15 important?

Despite not being as well known, the UN Convention on Biological diversity is equally important as the one on climate change (COP26), Edwards says.

The Kunming Declaration, agreed at the conference on Wednesday, is a call to action for all parties participating in COP15 to stop the loss of biodiversity and achieve sustainable development.

“Probably the single most important words in that declaration are a commitment to ensure that biodiversity is put on a path to recovery by 2030, at the latest,” says Edwards.

It signals an ambitious and necessary agenda, outlining the steps that need to be taken to achieve that goal in the next 10 years. WWF and many other conservation organisations have described this as having a “nature positive” world. One where there is more nature on our planet in 2030 than there was in 2020.

More than $700 billion will be needed every year to reverse the decline in global biodiversity.

“If you imagine a curve of nature over time, nature has been collapsing, it needs to stop collapsing and it needs to begin recovering and rebuilding.”

The declaration will also signal the ambition for the second half of COP15 which is set to be held in April and May next year. Here countries will agree on further rules and actions on nature - known as the post-2020 Global Biodiversity Framework.

This will outline exactly how countries plan to change their impact over the next 10 years and could turn the tide on nature loss and climate change. Any agreement, however, will need to include adequate funding.

It is estimated that more than $700 billion (€604 billion) will be needed every year to reverse the decline in global biodiversity.

How can COP26 help with saving nature?

WWF and other organisations say there are still holes in the Global Biodiversity Framework’sthe official draft that need to be filled to tackle the problem properly. These include a lack of information about the climate saving potential of nature-based solutions and little inclusion of Indigenous people and local communities.

New momentum and focus on these issues at COP26, however, could help.

“Sometimes they feel like they're in parallel universes with the same problems,” says Edwards.

If you are a community working on mangrove restoration and sustainable fishing, for example, you aren’t thinking in these kinds of individual silos. These actions help with both climate change mitigation and contribute to efforts towards preserving biodiversity. The goals of the two UN conferences need to be more aligned, he adds.

“I think that the real opportunity here is that the UK government has put nature at the heart of COP26. It is in recognition of the fact that, while not enough, progress has been made on the energy sector side but there’s not nearly enough momentum on nature.”

COP26 is just around the corner. Here's what needs to happen | View