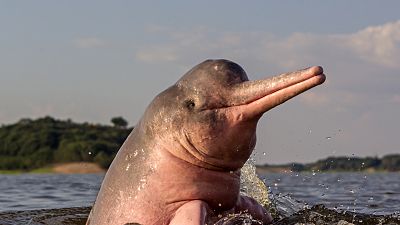 Fishermen who once angled for rare pink river dolphins are now working with researchers in Bolivia's Amazon jungle to ensure the species' survival.

In a high-tech bid to better understand the dolphin, scientists with global environmental group WWF and Bolivian NGO Faunagua tagged four of the freshwater dolphins in the Ichilo river. Using satellite technology, fishermen are now able to track the dolphins using a smartphone app and report their locations.

Despite the iconic status of river dolphins, little is known about their population and habitats. Data from the tagging program will help provide vital information about what dolphins eat, how far they migrate and the threats they face in the Amazon.

It also gives fishermen a new perspective on a species that has long been their prey, says Lila Sainz, head of Bolivia's WWF.

“Everything that affects dolphins affects the humans that use those resources, and it inhabits the surrounding marine ecosystems. So, if dolphins are doing well, people are doing well,” she adds.

Bolivia's vast Amazon rainforest is a critical habitat for a wide range of species, all of which are threatened by deforestation, upriver dams, forest fires and development.

The tagging programme is just one way the WWF hopes to better protect this dolphin species against extinction.

Bright red spider discovered as colourblind, in a cruel twist of fate