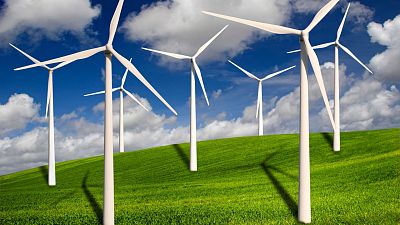 Wind energy is eco-friendly, but what if the turbines generating the power aren’t?

Defunct wind turbine blades are piling up around the world. With the estimated lifespan of each blade around 20 years, many of the earlier models are now sitting in landfill sites across Europe and America.

But some organisations are coming up with innovative ways to reuse and repurpose them. Creating striking street architecture, adding them to concrete mixes and even building bridges. Siemens Gamesa, a company based in Zamudio, Spain has gone one step further, and created the world’s first fully recyclable turbine blade, aptly named the RecyclableBlade.

Up until this point, blades have been made of a composite of different materials covered in resin which, like disposable coffee cups, has made them difficult to separate and recycle.

Many of the blades produced since the 1970s - when wind power became popular - are now stacking up in landfill sites. Around 3,800 turbines come out of service in Europe every year.

The Re-Wind Network - an interdisciplinary team working on viable solutions to repurpose blades - estimates that by 2050 around 39.8 million tonnes of material from turbine blades will be awaiting disposal.

The RecyclableBlade is hoping to change this, but as Lawrence Bank from the Re-Wind Network points out, “It will only come Out of Service in 30+ years from now. We are concerned with today”.

Hoping to reduce the problem of blade wastage, Siemens Gamesa’s RecyclableBlade is an industry first.

“Like other blades, the RecyclableBlade is made by a combination of reinforcement materials that are embedded in a resin to form a strong and stiff lightweight structure,” says Jonas Jensen, Sustainability Specialist at the company.

“The difference is the use of a new resin with a different chemical structure, which makes it possible to dissolve the resin in an efficient process at end-of-service life.”

Once broken down in the acidic solution, the blade materials can be used in consumer goods, including flat-screen TVs and suitcases.

Dissolving this resin means the blade can be taken apart, “in order to separate the materials, the process requires the blade to be submerged in a heated acidic solution for a few hours”, continues Jensen.

“Acid rain will therefore have no effect on the blades, as the process will only take place with both constituents there at the same time; heat and acidic solution.”

Once broken down in the acidic solution, the blade materials can be used in consumer goods, including flat-screen TVs and suitcases.

Making turbine blades fully recyclable is one of the biggest hurdles for the wind turbine industry, as 85 per cent of each turbine is already recyclable. Siemens Gamesa estimates that if its blades are used on all new wind turbine schemes by 2050, 10 million tons of all the composite materials could be saved from landfill.