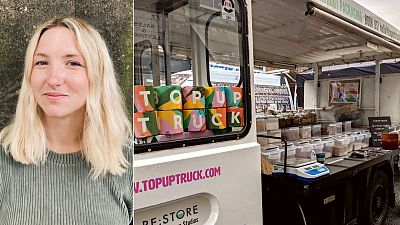 Ella Shone is the founder of TopUp Truck, a refill store on wheels that delivers plastic-free groceries to Londoners.   -   Copyright  Euronews Green
By Maeve Campbell  •  Updated: 20/12/2021

In each episode, you’ll discover a pioneering project tackling an environmental issue in a city. Our first series hones in on London and the weird and wonderful ideas that unite local people in protecting our planet.

When the COVID-19 pandemic struck in March 2020, Ella Shone was hit by a wave of inspiration. Plastic pollution was mounting, with personal protective equipment (PPE) being handed en masse and single-use packaging on the rise.

Hailing from a food and wholesale background, Ella realised there was something she could do to help.

After impulse buying an old electric milk float (an open-sided van) and revamping it herself, she soon had a refill store on wheels. Now Ella could deliver groceries straight to people’s doors - without any single-use plastic. She wanted to make it easier for people to do their shopping without having to throw away the packaging waste most products come wrapped in at supermarkets.

That’s when TOPUP TRUCK was born.

Her famously hipster local neighbourhood of Hackney seemed like a great place to start. Ella set to work and soon amassed thousands of customers keen to refill their household essentials every week, rather than go out and buy them new.

“Customers can stumble out onto the street with their pyjamas on, bleary eyed, jars in hand, and top up their larders with minimal fuss,”​ says Ella.

From lentils to laundry liquid, the TOPUP TRUCK has over 150 products on board. It houses everything from dried foods like pasta and rice to drums of olive oil, vinegar and even shampoo and conditioner. Customers can bring their own containers to fill up with Ella’s goods.

Click on the video above to watch Ella’s refill truck in action.

Why is plastic pollution so serious?

The environmental toll of plastics is no laughing matter. Five million tonnes are used every year in the UK, nearly half of which is packaging.

Not only is plastic debris ingested by marine animals, injuring and poisoning our wildlife, if it sits idle in landfill it won’t decompose for more than 500 years. The harmful chemicals added to plastics are also absorbed by humans, making their way into our food chain via groundwater and the consumption of fish.

According to some studies, Brits who eat fish are at risk of consuming 11,000 fragments of plastic each year.

Just 16 per cent of plastic waste is recycled to make new plastics, while 40 per cent is sent to landfill, 25 per cent to incineration and 19 per cent is dumped.

It might be convenient to carry your fruit and veg home in plastic bags or tightly wrapped film, but it’s actively harming the planet at the same time.

So if we can do our bit to cut down on the world’s plastic problem, we should.

That’s why it’s so important to have people like Ella spearheading sustainable projects which transform local neighbourhoods and help clean up our cities.

What is TOPUP TRUCK doing now?

Since meeting Ella, business has taken off. She has now moved into a new warehouse space to stock all her produce and added more storage dispensers to the truck.

Ella has just received funding from ReLondon (a circular economy programme run by the Mayor of London and London’s boroughs) and is partnering with schools and nurseries to help parents with their shopping needs.

“It’s a great way to get kids thinking about plastic pollution and their environmental impact from an early age in a fun and experiential way,” says Ella.

To date, TOPUP TRUCK has eliminated the need for over 28,000 pieces of plastic and hopes to increase this figure exponentially by expanding to other boroughs of London and eventually further afield.

For all her hard work, Ella has been nominated for a GBEA Sustainability Entrepreneur award and was shortlisted in two categories in the National Recycling Awards.

Green in the City