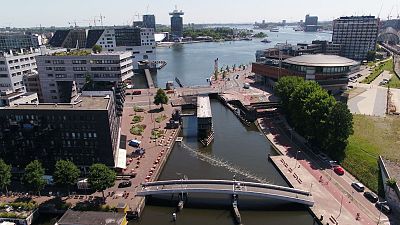 The power of tiny bubbles is being harnessed to remove plastic pollution from Europe’s rivers.

Dutch start-up The Great Bubble Barrier has developed an ingenious way of intercepting rubbish, by creating a curtain of bubbles that pushes plastics to the side of the waterway.

In a pilot test conducted in the IJssel, the bubbles caught 86 per cent of material. Promising news for the long term barrier installed in an Amsterdam canal in 2019, which is stopping trash from reaching the North Sea.

Now the team is taking their technology outside of the Netherlands for the first time, with a new Bubble Barrier to launch in Portugal in summer 2022.

An exact location for the new project - which was announced on World Clean Up Day last Sunday - is yet to be revealed, but it will arrive in the region of Porto.

"There is an urgent need for measures that stop plastic from flowing into our oceans. With the installation of a Bubble Barrier in the Porto region, we will be able to tackle the problem close to the source" explains co-founder of The Great Bubble Barrier and Chief Technical Officer Philip Ehrhorn.

“At the same time, we aim to build awareness among both residents and visitors about the issue of plastic pollution, making the impact of the project bigger than just regional.”

According to a recent study in the UK journal Nature, the Porto region is home to two of the rivers with the highest levels of plastic pollution in Portugal.

The Great Bubble Barrier is part of ‘project MAELSTROM’ - a consortium of 14 European parties dedicated to fighting marine pollution.

Co-funded by the EU, the project - which stands for ‘MArinE Litter SusTainably RemOval and Management’ - will explore new methods for recycling and reusing the riverine litter, in line with the Circular Economy Action Plan of the European Union.

The Great Bubble Barrier is calling for local stakeholders and communities around Porto to get on board too. As project MAELSTROM will only finance 70 per cent of the project, the Dutch founders are seeking other organisations to help fund the installation and operational costs.

It is not the only exciting new technology being trialled. MAELSTROM is also bringing an underwater cable robot to the Venice Lagoon and coastal area around Venice.

How does the technology work?

Inspiration struck one night. Dutch friends Anne Marieke Eveleens, Francis Zoet and Saskia Studer were enjoying a drink while bemoaning the amount of plastic they saw in the water during their sailing classes, when they started looking differently at the bubbles in their beer.

They teamed up with German surfer Philip Ehrhorn and, after an award-winning start in 2016, have been perfecting the technology over the past five years.

A Bubble Barrier is made by placing a perforated tube diagonally on the river bed, which creates an upward current directing the plastics to the surface and guiding them into a catchment system.

It catches plastics bigger than 1mm, but is soft enough to enable migrating fish to pass through, and in fact increases the amount of oxygen in the water, further benefiting the ecosystem.

The first Bubble Barrier was installed in Amsterdam’s Westerdok canal, which flows into the river IJ, in 2019.

The Great Bubble Barrier and project partner Ciimar are currently assessing several locations in Porto and will announce their choice by the end of the year.

Next, the bubblers plan to take their technology to Asia, where 8 out of 10 of the world’s most polluted rivers are located.