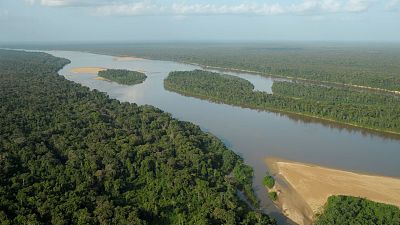 Deforestation is speeding up global warming, but not just for the reasons you might think.

New research from think tank Planet Tracker has come out to suggest that deforestation is causing a significant shift in the rain patterns in tropical parts of the planet.

Deforestation has long been a focus of climate activism because of the important role that forests play in removing CO2 from the earth’s atmosphere. But it wasn’t known until now just how big an effect the rainforest had on the weather around it.

As rainforests are increasingly cut down, their loss is causing dramatic shifts in rainfall across countries like Brazil. This could have a potentially devastating impact on industries key to Brazil’s economy such as soy and maize production.

“These results counter the thinking among most economists that forest protection is a luxury,” says Frances Seymour, a distinguished senior fellow at World Resources Institute.

She explains that, for too long, Western countries assumed that tropical countries like Brazil in the Global South were “taking one for the team” by reducing deforestation, instead of it being a necessity.

It’s in these country’s own interests to curb deforestation to keep their agricultural supply chains running.

How deforestation is changing rainfall patterns

Forests play a key role in the water, carbon and energy cycles of a climate. This means they help control local and regional rainfall patterns through evapotranspiration.

Evapotranspiration is the process that transfers water from the soil into the atmosphere. This can be through evaporation through heat, or by transpiration from plants drawing water up through their roots out of their leaves.

Deforestation is affecting the amount of rain produced in Brazil and experts are concerned that if there is a significant reduction, Brazil’s agricultural output could seriously suffer.

Deforestation is affecting the amount of rain produced in Brazil and experts are concerned that if there is a significant reduction in rainfall over the coming years, Brazil’s agricultural output could seriously suffer.

Worryingly, deforestation is at its highest level in 12 years according to data released in 2020 from the Brazilian National Institute for Space Research.

Brazil’s climate is even more susceptible to changes in climate because it relies on double-cropping to maximise the amount of agricultural products it can produce.

Whereas many countries only plant one kind of crop in one piece of land every year, it is common in Brazil to switch between two different crops, such as soy or maize.

“Double cropping needs predictable rain patterns and predictable rainfall. You haven’t got the flexibility with the second crop as you can’t wait longer to reap the first if there’s a delay in rainfall,” explains Peter Elwin, Director of Fixed Income & Head of Land Use Programme at Planet Tracker.

Double-cropping is an incredibly effective way to maximise output from a piece of land.

The problem is that the Brazilian government is pushing to use more and more of the country’s land for double-cropping, bringing an increase in deforestation with it.

But the research now shows that if deforestation continues at this rate, the effect on rainfall will counteract any benefit from creating the extra land.

How can we reverse the problem?

The good news from the research is that there’s plenty of land for Brazil to continue its important agricultural work on without needing to add to deforestation.

“Studies have shown Brazil has untapped capacity to grow without further deforestation. But if more deforestation is allowed, they will harm their ability to do that,” Elwin says.

“The key thing we want to see is the Brazilian government engage with the concept that they’re harming their future prospects,” he continues.

There are also additional benefits to preserving the rainforest, argues Deborah Lawrence, a professor of environmental sciences at the University of Virginia, US.

I can’t overstate that forests are an important climate regulator.

“The human story is huge. When you deforest, it’s like having an extra half a degree of global warming. That’s a big effect. That’s increasing all sorts of heat stresses on humans. I can’t overstate that forests are an important climate regulator,” she adds.

The researchers hope this newfound information will pressure the Brazilian government into changing domestic policy to focus more on preventing illegal deforestation.

Why does this tree need refugee status?