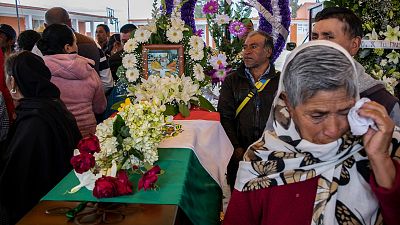 People mourn next to the coffin with the remains of Mexican environmentalist Homero Gomez González, during his funeral in El Rosario village, Mexico.   -   Copyright  ENRIQUE CASTRO / AFP
By Rosie Frost  •  Updated: 13/09/2021

Murders of activists defending the environment and land rights hit a record high last year, according to a report by Global Witness.

The figures released today show that 227 environmental defenders were killed around the world in 2020. It is the second consecutive year that the NGO has reported a record number of murders of those working to protect natural resources such as water supplies, forests and oceans.

Colombia had the highest number of recorded attacks with 65 environmentalists killed in 2020. Global Witness says a third of these attacks targeted Indigenous and Afro-descent people and almost half were against small scale farmers.

Almost a third of all attacks recorded in 2020 targeted Indigenous people.

“One day, we hope to report an end to the violence against those defending our planet and their land,” says Chris Madden, senior campaigner with Global Witness.

“This dataset is another stark reminder that fighting the climate crisis carries an unbearably heavy burden for some, who risk their lives to save the forests, rivers and biospheres that are essential to counteract unsustainable global warming.”

Of those environmental defenders who were attacked for protecting specific ecosystems, 70 per cent were working to prevent deforestation and industrial development in the world’s forests.

Logging was the sector linked to the most murders including the death of activist Raúl Hernández who disappeared after leaving his job as a tour guide at a monarch butterfly sanctuary in Mexico.

He was the second fatality in this community of conservationists after fellow environmental defender Homero Gómez González. González managed El Rosario de la Mariposa Monarca, a butterfly sanctuary that opened in November as part of a strategy to stop illegal logging in the area.

Every year tens of thousands of monarch butterflies migrate to the region from the US and Canada. The mountainous forest in central Mexico is a vital habitat for these insects.

González’s relatives told local media that he had received threats warning him to stop his campaign against logging from a local crime gang. After more than 200 volunteers joined the search for the environmental activist, his body was discovered in a reservoir in central Mexico in January 2020.

Governments need to ‘get serious’

Despite the record number of killings, many murders go unreported, particularly in rural areas. Growing restrictions on journalism and other civic freedoms mean that this “shocking” figure is likely to be an underestimate according to Global Witness.

The report says that states around the world - including the US, Brazil, Colombia and the Philippines - have used the COVID-19 pandemic to “strengthen draconian measures” which control citizens.

Global Witness is calling on governments to ensure national policies protect those that defend the environment and scrap any policies that criminalise them.

It wants the UN to formally recognise the human right to a safe, healthy and sustainable environment, adding that any commitments to action the Paris agreement at COP26 should include human rights protections.

The NGOs own research shows that more than 963 people have been killed defending their land since the Paris Agreement was signed in 2015.

The report also recommends that companies and financial institutes be required to provide accountability for violence and any other harm that may come to environmental defenders throughout their global operations and supply chains.

Madden says that companies need to start “putting people and planet before profit”. If they don’t then both climate breakdown and these killings will continue.