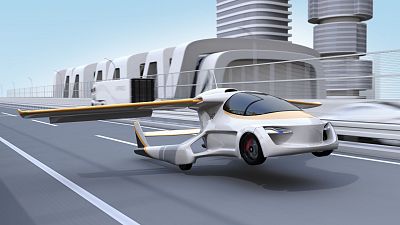 Flying cars have captured the imaginations of designers and drivers since the pioneering age of motoring. Combining a road vehicle with flight seems like the perfect solution to congested routes, saving time for everyone - no?

Today, we’re closer than ever to making flying cars a reality, but how close is this to becoming an everyday occurrence?

There are plenty of companies working on flying cars. Japanese car making giant Toyota has already invested £275,000 (€322,702) in the Cartivator group that is developing the machine, while Volvo and Lotus' parent company Geely has bought US-based arm Terrafugia.

The Terrafugia Transition is how many people will imagine a flying car should look, combining many elements of a light aircraft within the size constraints of a car.

However, the Terrafugia also shows up one of the key hurdles to a successful flying car: it needs a runway to get into the air.

The practicalities of using a runway greatly reduce the appeal of a flying car as a viable means of transport. After all, why not use a car to drive to an airfield, fly to your destination and complete the journey in another car?

This is the conundrum that other companies working on flying cars are looking to solve with VTOL (vertical take-off and landing) designs.

The practicalities of using a runway greatly reduce the appeal of a flying car as a viable means of transport.

While the VTOL idea has been around for many years, notably with the Harrier ‘jump jet’ used by many air forces around the world, the only successful civilian application of this has been the helicopter.

This type of aircraft is expensive to buy and run, and it requires a high degree of training to pilot. For a flying car to work, it needs to be affordable and as simple to fly as it is to drive.

The huge growth in drone technology has answered some of the questions about VTOL ability and doing away with the need for a runway. However, there are still obstacles to the introduction of flying cars with this type of flight system.

"At present, the idea of a flying car is very much a rich man’s toy and will be built in tiny numbers. I think the real future of this type of vehicle lies in pay-per-use as a taxi and that means testing methods will have to account for both road and air use. That brings many conflicts as it requires a large amount of energy to get a vehicle airborne."

He continues, "car makers are interested in flying cars because they can take the lead in a disruptive technology at a time when they are faced with becoming car assemblers as others come to the fore in autonomous technologies."

At present, the idea of a flying car is very much a rich man’s toy.

This is why the likes of Toyota and Geely are so keen to invest and acquire firms developing flying cars.

That doesn’t mean flying cars will remain a dream. Many of the challenges in automotive and aeronautic engineering are the same: reduction of weight and increased efficiency. Again, drones are proving to be a good solution for many looking at the flying car market, such as Uber and Boeing, but they are much more scaled up drones than a car capable of flight.

The success of drones

Dutch firm PAL-V reckons it has come up with the answer with 'Liberty'. It uses the same principles as an autogyro, so has a large rotor to provide lift. On the ground, this stows flat against the roof of the two-person passenger cell.

The advantage of the autogyro design is the PAL-V needs a very short space to take off and land, and it also stores away to make the Liberty sufficiently compact to use on the road without worrying about its width, length or height.

However, the PAL-V remains an expensive option at around £350,000 (€410,868). This does include the cost of training to fly the Liberty and that takes place at several sun-drenched locations around the world so the wealthy buyers can enjoy a holiday at the same time as clocking up their minimum 40 hours of flying.

Autonomous technologies will help de-skill driving and flying to make them both safer.

To make the flying car a much more attainable prospect for more drivers, the cost and complexity need to be tackled. This is where Ian Constance sees a crossover between automotive and aero industries coming to the rescue.

"Autonomous technologies will help de-skill driving and flying to make them both safer to the point where these vehicles are a possibility for a large number of users," he says.

"However, testing will be complicated as the systems will have to work seamlessly on the ground and in the air. This is why car companies are interested in flying cars because it’s forcing the pace of testing and development of autonomous vehicles. This then feeds back into road car production.’

So, the dream of coming out of the house in the morning and heading to work in your flying car may remain tantalisingly out of reach for now - but who knows what the future will hold.