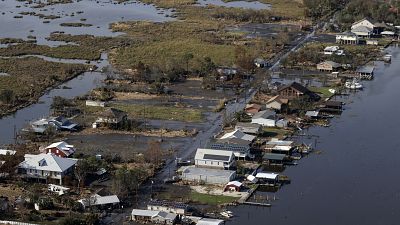 Workers have deployed containment booms and skimmer devices as they attempt to contain a sizable oil spill in the Gulf of Mexico discovered after Hurricane Ida.   -   Copyright  AFP
By Ruth Wright  with APTN  •  Updated: 15/09/2021

A major oil spill caused by Hurricane Ida is being cleaned up in the Gulf of Mexico. The spill is estimated to be 19km long and is just one of dozens of environmental disasters resulting from the hurricane.

All of the these disasters are in Louisiana and the Gulf of Mexico, a major centre for the US oil and gas industry.

The spill, at Bay Marchand, appears to be coming from an undersea pipeline, a former site of offshore drilling. Clean-up operations are underway, but oil is still leaking into the sea. It is not yet known how much oil has leaked out, but it seems to have remained out at sea rather than reaching the Louisiana shoreline.

Who is responsible for the oil spill?

A US Coast Guard spokesman said the spill is believed to be crude oil from an undersea pipeline owned by Talos Energy.

Talos, a Houston-based energy company, said they are not responsible for the oil in the water, but have hired Clean Gulf Associates to deal with it. Talos say they ceased production at the site in 2017, plugged its wells and removed all pipeline infrastructure by 2019.

They have sent two response vessels to clean up the oil and divers will descend to the bottom to try and find the source of the leak.

Who is cleaning up the oil spill?

Its workers are using a containment boom to try and stop the oil spreading. They are also using skimmers, a device which removes oil from the surface of water. The Coast Guard said only about 160 litres have been removed so far.

Hurricane Ida has left behind a trail of disaster

Along with the human devastation caused by the hurricane, the impacts on the environment will be long-lasting.

Last week, the Associated Press published images from a National Atmospheric and Oceanic Survey that showed extensive flooding and what appeared to be petroleum in the water at the sprawling Phillips 66 Alliance Refinery, on the Mississippi River south of New Orleans.

After they published the photos, the US Environmental Protection Agency sent an aircraft to survey the damage, as well as other industrial sites in the area hardest hit by the hurricane's 150mph (240kph) winds and storm surge.

The Louisiana Department of Environmental Quality said a state assessment team sent to the Alliance Refinery observed a spill of heavy oil being addressed with booms and absorbent pads.

A levee meant to protect the plant had breached, allowing floodwaters to flow in during the storm and then back out as the surge receded.

Officials said there was no estimate yet available for how much oil might have spilled from the refinery.

Explained: What is LNG and why does the EU want so much of it?