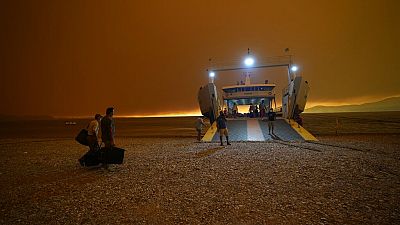 Smoke spreads over the sea as local residents and tourists use a ferry to evacuate Pefki village on Evia island on August 8 2021.   -   Copyright  Petros Karadjias/Copyright 2021 The Associated Press
By Rafael Cereceda  •  Updated: 06/09/2021

As summer comes to an end in Europe, many of us are looking back on one of the hottest summers of our lives.

From the historical high temperatures in Sicily and flooding in Western Europe, to the devastating wildfires in Greece and Turkey, extreme weather events have affected the lives and routines of many.

As a journalist, I'm used to writing about these events as just one news story of many in a day's work. That may sound insensitive, but if journalists let themselves be absorbed by every tragedy, we'd be emotionally exhausted.

But as a Spanish expat based in France, extreme weather hit me in a much more personal way this summer.

Road trips will never be the same again

Whenever I have the time, I return to Spain by car rather than plane. This wasn't always the case - I flew between Lyon and Madrid for years. But I started to find all the hassle of airports too much so I switched to driving. At the time I wasn't aware of the added environmental benefits, though of course they are many.

Planning a road trip around a heatwave

This summer in Lyon, where I work for euronews, wasn't really a summer at all. It has been wet and cold since spring. It was a relief in some ways - previous years have been unbearably hot and humid. But it meant that arriving in Spain to 37ºC was a real shock to the system.

Many people seem to think that as a Spaniard you must love hot weather. But, no, not me. in fact, not many of us. We just know how to survive it. We avoid the hottest hours of the day, stay in the shade as much as possible and hydrate properly.

I used all of this knowledge when planning my journey. I only drove in the coolest hours, until midday or so, then stopped til the evening. Even then, it was still hot, as it doesn't really cool down until late evening.

My car has air conditioning but I try not to use it, and it doesn’t make much of a difference in these temperatures anyway. The hot sun essentially turns your car into a moving oven.

I enjoyed my holiday, but temperatures were rising every day. Meaning that when it came time to drive back to Lyon, it was 44º C. The first big heatwave of the summer, predicted to last for almost a week.

A few minutes before I was due to leave, a friend got an alert: wildfires were erupting all over the region. One of them was near the N-502, at Navalacruz, one of the roads I had to take.

When I got there, I saw the burning wreck of the car that had started the fire. There were firemen and women everywhere and a column of smoke that must have stretched for 50km. I thought that, as it's a high altitude area, it would be easy to contain the fire.

But the road was closed to traffic the next day, as they struggled to contain it. Navalacruz was the worst wildfire in the history of the Castilla y León region.

It was definitely one of the saddest drives of my life. Especially when I considered that this wildfire was tiny in comparison to the many others burning around the world at the same time.

When I got to Valladolid, a storm appeared out of nowhere. I was suddenly surrounded by strong gusts of wind and driving rain. It was so difficult to control the car that I thought I was going to end up in a ditch at the side of the road. Then almost as quickly as it had started, it was over. There had been no warnings on the radio of this storm. It was so strange to experience.

When I arrived in France and tuned into the local radio, I heard a huge wildfire was burning in Var. It was a gruesome reminder that maybe this is the new normal.

Things got cooler and calmer the closer I got to Lyon. There were a few hot days the week I was away but a proper summer never arrived. The friend I'd asked to water my plants hadn't even needed to come round.

My journey is just one, of course. It was uncomfortable at times but bearable for the most part. But I was surprised by how there was no warning of the storm, despite checking lots of different sources for weather forecasts - as the weather geek that I am.

Should the storm, an extreme weather event, however short, have shown up on the forecasts?

Be prepared - as best you can

According to meteorologist Scott Duncan it’s a complicated question. “Weather models often do very well at predicting extreme weather”, he says, citing the Canadian heatwave earlier this summer and the flooding in Western Europe. But, he says, “being able to warn the public of extreme weather is a real challenge, especially if it's an unprecedented event.” Climate change is bringing more of those every year, so this wasn't comforting to hear.

Duncan explains that, at best, forecasts can predict extreme weather events 10 days in advance. Traditionally we have planned holidays months in advance, so this doesn't sound very helpful.

He says most extreme weather events are predicted far enough in advance to allow for local residents to prepare themselves, meaning at least a few days ahead. He gives Hurricane Ida as an example, where forecasts have allowed for life-saving preparations. Despite this, it has still caused widespread devastation.

Phenomena like flash floods have always been pretty difficult to predict, Duncan says. And some studies suggest that predicting flash flooding is becoming increasingly difficult because conditions can change in a split second.

Medium range forecasts give some idea of what's coming, but aren't accurate enough to plan a holiday around.

Where does this leave us?

We don't need to stop going to risky destinations or live in fear of extreme weather - that's no kind of life. But it will pay to be more aware. You can still enjoy a digital detox on holiday, but check weather apps and local news sources occasionally.

The good news is that professional meteorologists have increasingly accurate models when it comes to warn about extreme weather, thanks to what Scott Duncan calls "the silent revolution of weather technology and forecast systems". Nevertheless he regrets that most weather apps don't help effectively in predictions and warnings, but with the right interpretations by meteorologists, lives can be saved. The World Meteorological Organisation's recent report highlighting that there are fewer casualties despite the increasing frequency and power of extreme events seems to confirm this view.

Whether on holiday, business or in everyay life, we will have to get used to anticipating bad weather. Being more resilient, as the IPCC calls it.

Choosing a destination you don't have to fly to is one key way, of course, to reduce your own contribution to global warming.