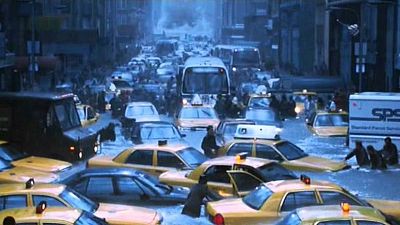 As New York is hit by flash floods in the aftermath of Hurricane Ida, misleading images have been circulating online.

Across social media, you’re likely to have seen photos of subways flooding and bags of rubbish floating down the street. These images are real and more than sufficient in illustrating the crisis we are facing.

However, an image of New York’s iconic yellow taxis huddled together and partially submerged has been shared widely on Twitter and Instagram. This is actually a still from the 2004 film The Day After Tomorrow, a post-apocalyptic disaster movie based on an unscientific and dramatised interpretation of climate change.

It seems that the confusion has arisen from an initial tweet that compared the film scene with reality.

Others have highlighted how dystopic the footage of the floods is, comparing the real-life scenes in New York with other disaster films like 2012.

Unlike a film, however, the tragedy associated with this bout of flooding is all too real. So far at least 45 people have died across the northeastern states of Pennsylvania, New Jersey, New York.

Congresswoman Alexandria Ocasio-Cortez said on Twitter yesterday that the majority of the deaths “occurred in basement dwellings”, as the water flooded buildings that were not equipped to handle the weather. Today it was confirmed that at least 12 people have died in basement floods.

Ocasio-Cortez highlighted that many of these underground residences are not legal, largely because they “do not meet the safety standards required to keep people safe in incidents like flash floods”, yet are growing in number because of the unaffordable housing crisis in New York and other major cities.

She emphasised how this is an example of the climate crisis also being an “inequality crisis”.

The climate crisis is making our weather more extreme

Subway stations have once again been filled with fast-flowing water, as extreme weather events swept much of the United States.

Similar scenes occurred back in July, with large parts of London and New York devastated by floods.

In mainland Europe, around 200 people died earlier this summer in serious flooding.

Germany, Belgium, Austra, Luxembourg, Switzerland and the Netherlands were all hit by extreme floods. New Zealand and North Korea also experienced similar weather patterns, as rivers burst their banks and destroyed farmland across the countries.

The World Meteorological Organization says the number of extreme weather-related disasters has increased five-fold over the last 50 years.

More than 11,000 disasters related to weather and water extremes took place between 1970 and 2019. Scientists say this uptick is largely due to climate change and shifts in global temperatures.

There is a modicum of good news, however. Over the same 50-year period, the number of deaths from storms, droughts and floods has fallen sharply. This is because the systems we use to detect and predict extreme weather patterns have improved, so it’s more possible to warn people ahead of time.

There’s still far more work to be done though, as 90 per cent of disaster-related deaths were in developing nations. Experts highlight that the people in those countries have contributed the least to the climate crisis, yet are paying the greatest price.

Droughts have been the biggest killer, taking 650,000 lives.

Climate change is a significant contributor to droughts, as the rise in global temperatures creates longer and hotter heatwaves, limiting rainfall and drying water supplies faster.

The extreme temperatures in northwestern US and Canada earlier this year were caused by heat domes, where the atmosphere traps hot ocean air.

At least 500 people died in Canada alone from this year’s heatwave.