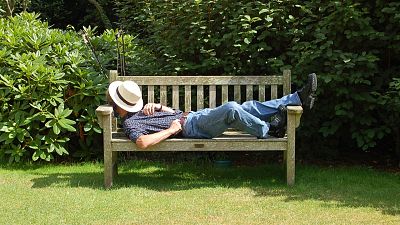 The UK’s largest conservation charity is giving some of its staff flexible working hours in order to handle exceptional heat.

Staff and volunteers will be granted longer afternoon breaks at the National Trust’s Ham House in Richmond, Surrey.

Unbearable temperatures surpassing 40°C caused the venue to close for the first time it’s history in 2019.

Many other Trust properties are going to be monitored for extreme temperatures and could be forced to close during peak times during future British heatwaves.

Ham House is a 17th-century property bordering the River Thames that has been used as a filming location for the likes of Downton Abbey and the Spice Girls.

Like many old British structures, the architecture in place here is hardly climate change-friendly.

The building was constructed with large windows and a sun-facing facade to produce “passive heating” during frosty winters.

A lot has changed since then; summer temperatures in mainland Europe have been breaking all-time records and Britain isn’t far behind. Last July was its fifth warmest ever.

Temperatures during Ham House’s closure two years ago may have sat at 40°C but many of the site's rooms were measured as feeling like they were in the region of 50°C.

Like many old British structures, the architecture in place here is hardly climate change-friendly.

A continuation of this pattern will make visiting and working in these spaces increasingly difficult as they sit well above the “ideal” visiting temperatures of 21°C researched by the Trust.

For this reason, it’s employees will be given the opportunity to take extended lunch breaks to avoid peak mid-day heat.

This has been referred to by some media outlets as “siesta-style” Mediterranean working.

The National Trust is offering staff the opportunity to switch to “Mediterranean working hours” because it says climate change is sometimes making it too hot to work in the heat of the afternoon sun https://t.co/UNwbSNKmJn

How could National Trust sites be threatened by warming temperatures?

Humans are scientifically not cut out to be productive in above-average heat and this policy works to address that reality.

There are also more material threats at play - conservationists are constantly adapting to problems posed by climate change on historic buildings and places of beauty.

“If emissions aren’t reduced, then it could mean that an increasing number of stately homes and indoor tourist attractions are forced to temporarily close more often due to excessive heat,” says a spokesperson for the National Trust.

Some climate experts fear valuable paintings will be prone to “blistering” if temperatures reach seasonal highs. There are also concerns that traditional English gardens will need to be fitted with shrubbery and flora better suited to Mediterranean environments in order to not dry out.

What can be done to protect our historic spaces from climate change?

The UK’s £125 billion tourism industry may not be ready for extreme weather without investment.

Along with flexible working hours, the National Trust has said it plans to introduce a number of physical changes to its sites.

These include shade being added to outdoor seating areas at many sites and passive ventilation installations.

The UK’s £125 billion tourism industry may not be ready for extreme weather without investment.

It doesn’t end with heat, though. All extreme weather is being addressed - trees are being planted away from human traffic in the event of intense storms.

As a short-term measure, the lake at Chesire’s Lyme Park is having a large amount of silt removed to prevent flooding. Other areas prone to flooding are also undergoing extensive planting to protect surrounding car parks and the property.