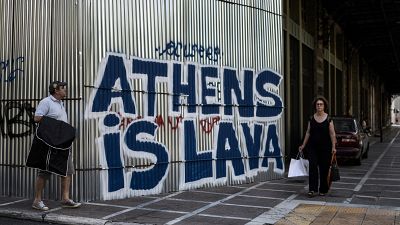 Experts in Greece want to start naming and ranking heatwaves in a similar way to storms.

The National Observatory of Athens thinks that this move will help both the public and officials to better understand the risks posed by extreme weather events.

Dr Kostas Lagouvardos, research director at the Observatory, told The Observer that naming heatwaves could act as a preventative measure to help citizens and policymakers be better equipped.

“We believe people will be more prepared to face an upcoming weather event when the event has a name,” he says.

The country has experienced two periods of unusually long and intense heat since June. At the beginning of August, northern Greece reached 47.1 degrees Celsius - breaking the country’s record for the highest temperature ever.

Earlier this month, Greek Prime Minister Kyriakos Mistotakis said that unprecedented conditions had “turned the whole country into a powder keg”. Almost 600 wildfires raged in the space of a week leading thousands to evacuate their homes as firefighters battled the blazes.

It could be a taste of what’s to come in the future for countries in this region. A recent draft UN report warned that warming across the Mediterranean would be around 20 per cent higher than the global average.

Athens is already mainland Europe's hottest metropolis and is expected to suffer greatly from extreme heat and drought in the future. The city recently appointed one of the world's first chief heat officers, Eleni Myrivili.

"Heatwaves on their own right are responsible for large numbers in morbidity and mortality in our region," she says, adding that the city has high levels of energy poverty that put pensioners in danger.

How will naming heatwaves help?

"Naming and categorising heatwaves in terms of severity would help people better understand them and the danger they present," says Myrivili.

"It would also enable decision-makers to trigger policies that would best protect the population."

She adds that currently much of the response to heatwaves is "vague and ad-hoc" but this change could help it to be more organised.

"[It] would create better conditions and opportunities both for awareness-raising and for establishing regulatory regimes of the policies and responses, which, set into effect, will protect lives, livelihoods and ecosystems."

Kathy Baughman McLeod, SVP and director of Arsht-Rock Resilience Centre, is leading the global call for the dangers of extreme heat to be properly recognised. Alongside a panel of experts, the organisation is developing a process for the categorisation and naming of heatwaves that are intense enough to cause serious harm.

“Heat is a silent killer, it sneaks up on you,” says Baughman McLeod, “it doesn’t have a season and it isn’t dramatic.”

But, she adds, it is quietly killing more people than any other climate phenomenon - particularly in places that are not accustomed to such high temperatures.

Giving these periods of extreme heat a name and category, what she calls a “retail trigger”, could help with that. “If it has a name, a hashtag, media coverage, then people pay attention,” Baughman McLeod explains.

This concept has already helped build a culture of preparation for tropical storms and hurricanes that Greece hopes can be replicated with heatwaves.