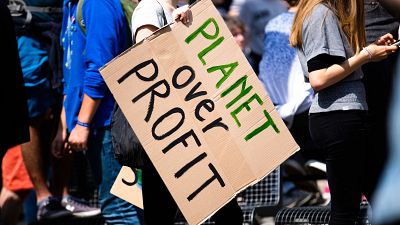 Activism, donations, volunteering and networking are all ways to feel empowered instead of anxious about the climate.   -   Copyright  Markus Spiske
By Marthe de Ferrer  & Ruth Wright  •  Updated: 04/10/2021

Yesterday, the Intergovernmental Panel on Climate Change (IPCC) published its latest - and starkest - paper outlining the severity of the climate crisis.

It was a heavy read, effectively confirming that the Paris Agreement goal of limiting global warming to ​​1.5°C by 2050 was out of our reach. Amid the damning findings was the conclusion that human activity is absolutely, “unequivocally” to blame for the climate crisis.

The release of the IPCC report, along with the subsequent wall-to-wall media coverage, has left many feeling desolate, helpless and hopeless. But that really shouldn’t be the case.

One of the main points highlighted time and again throughout the paper was that hope should not be lost. The scientists who authored the report emphasised that if we can still manage to cut global emissions in half by 2030, and reach net zero by 2050, we will be able to halt - and maybe even reverse - the temperature rise.

Environmental educators, climate journalists, and scientists on social media have been quick to stress this point as well.

“The one thing I am taking from today’s IPCC report and reporting is that we are not doomed,” wrote environmentalist Izzy McLeod on Twitter.

“We need action right now, no more empty promises and too far future goals from governments and industry,” they continued. “[It] doesn’t have to be a time for despair and gloom, it is time for continued action.”

In order to fix the climate crisis, we will need to see major policy changes from governments all over the world, along with genuine commitments from the private corporations and companies polluting our planet. But there are also things that we, as individuals, can be doing.

Here are some suggestions for spaces, events, organisations and actions you can try:

Environmental conversations and media often focus more on individual actions, instead of addressing the major societal, political and corporate changes that need to happen.

But that doesn’t mean individual actions aren’t still important. Our behaviour and choices still have an impact - on our planet, the people around us, policymakers, and companies.

Just look at what happened to plastic straws. Individual actions changed public opinion, which changed how companies behaved, and subsequently the law in many countries. Sure, banning plastic straws isn’t the widespread climate policy we actually need, and has arguably distracted from more pressing issues - but it does go to show the power of individual action.

Here are some areas of your life you can assess:

Look at where your savings, investments and pension are going

Going green with your money has been found to be 21 times more powerful in the fight against climate change than giving up flying, becoming vegetarian and choosing a green energy supplier combined.

And make sure that your green pension is actually green.

Donate to organisations that are making a difference

If greening your money leaves you with a bit of cash to spare, there are tons of organisations that will put it to good use.

350.org calls themselves “an international movement of ordinary people working to end the age of fossil fuels and build a world of community-led renewable energy for all.”

They are one of the biggest climate organisations, founded in 2008, and have had plenty of successes, like campaigning against the Keystone pipeline, getting more than 1,000 universities, foundations, cities and churches to divest more than €10 trillion from fossil fuels; and joining historic events like the People's Climate March and Global Climate Strike.

Their current focus is stopping all new oil, coal and gas projects and building a clean energy future. As they say, ‘The world isn’t ending, but the era of fossil fuels is.’

You can support their work here.

Monthly direct debits are especially appreciated by NGOs and charities as they help them to forward plan their work. But one-off donations will of course be very much appreciated too.

Greenpeace is one of the oldest and biggest campaigning organisations, with offices in 55 countries. They campaign on a wide range of environmental issues, including deforestation, whaling and, of course, climate change.

It doesn’t accept funding from governments, corporations or political parties, so donations are very much needed.

You can donate to Greenpeace here.

As part of the Native environmental justice movement, the Indigenous Environmental network (IEN) formed in the US after tribal grassroots youth and Indigenous leaders gathered to discuss the environmental assaults on lands, waters, communities, and villages.

You can donate to IEN here.

Avoid flying whenever you can

For the last 18 months, it’s unlikely you’ve been flying much, but when travel restrictions start to lift many of us are going to be keen to escape abroad.

In fact, so many people are looking to travel overseas that experts are worried about ‘revenge travel’ becoming a serious issue.

So if you are hoping to soak up some sun on the Spanish coast, or sightsee in Greece - consider travelling without soaring into the sky. We’ve rounded up seven cities you can reach by train in Europe here, but it’s far from an exhaustive list.

And when you do travel again, consider booking with this selection of the most eco-friendly travel companies in Europe.

Don't feel like you have to know it all

Lots of people of people feel put off from trying to ‘do their bit’ because they don’t think they’re informed enough. But the fact that you are aware that carbon emissions are a huge problem and need to be reduced is already more than enough.

You don’t need to understand the climate science or even how global warming works to know that the climate crisis is very serious. After all, very few of us understand how COVID-19 affects the body but we know that we don’t want to catch it and what we have to do to not catch it.

Don’t delay making changes in your life or becoming an activist while you read the IPCC report. It’s 1,800 pages long, after all. It could take a while.

Start with the knowledge you have and you’ll be pleasantly surprised how quickly you’ll feel much more informed.

Last year health professionals in the UK urged the government to introduce a carbon tax on meat by 2025. Food production and consumption accounts for over 25 per cent of global emissions, meaning addressing what’s on our plate is an important way to lessen our carbon footprints.

Doctors have said repeatedly that plant-based diets are vital in lessening the chances of another global pandemic too, while also reducing carbon emissions drastically.

In fact, researchers last year found that if people stopped eating meat altogether, we could remove between 9 and 16 years of CO2 emissions. This is not just because of the carbon emissions caused by meat production, but also down to the amount of space needed to grow animal-sourced food.

Restoring this land would allow for increased carbon offsetting through forest regrowth, argues Matthew Hayek who authored the study.

Use an app to monitor your emissions

The joy of living in 2021 is the sheer number of digital options at our fingertips.

If you want to get a better understanding of your impact on the planet, you can use an app to properly assess where your weak points are and address these going forward.

The Climate App is one example, which helps users reduce their carbon footprints by analysing their behaviour and suggesting changes.

Capture is another similar piece of software, which focuses specifically on tracking your carbon emissions. Whenever you find yourself facing a journey which has to be done by car or plane, Capture offers the chance to offset your emissions too - so you can at least slightly negate the damage being done.

One of the best ways to turn climate despair into hope is to offer your skills to grassroots environmental groups. Many people find it healing to be part of a group where everyone is as concerned as they are - and you’re all pulling in the same direction.

It can be difficult for smaller environmental charities and organisations to recruit skilled volunteers, particularly in light of the pandemic. They need people of every kind so it’s likely skills and experience you have will be warmly welcomed. It’s also an opportunity to learn new skills that will be beneficial in other parts of your life.

Clothing company Patagonia has long been known for its work in the activist space. From running campaigns in the Balkans to protect precious natural spaces, to campaigning against climate change deniers during last year’s US election - it’s perhaps no surprise that the brand has an entire programme dedicated to connecting volunteers with organisations.

Patagonia Action Works is a platform for connecting individuals with a global network of over 1,000 grassroots organisations. They focus predominantly on volunteers with technical and/or creative skills, in fields such as translation, graphic design, web development and social media.

There’s something for everyone though, with skilled volunteering opportunities that last just an hour during your lunch break, to the chance to work on major collaborations.

So far Patagonia Action Works has matched over 2,600 volunteers with environmental nonprofits since the platform launched in 2018. That’s 55,000 hours volunteered already.

In the UK, volunteers have worked with NGOs like the Irish Wildlife Trust, Power for People, Protect Our Winters, London Waterkeeper and more - saving groups an estimated €220,000 in consultancy fees.

“The past 16 months have been extremely challenging for everyone, in a multitude of ways. Environmental NGOs are struggling with reduced funding, whilst seeing the planet shift further and faster into crisis,” says Beth Thoren, director of environmental action and initiatives in EMEA for Patagonia.

“We know that skilled volunteering is of huge value to environmental organisations, and it is also extremely enriching to individuals looking for meaningful work.”

If you’re interested in finding out more, you can join an online panel tonight at 18:00 BST / 19:00 CET hosted by TV presenter June Sarpong.

Connect with other people

One of the best ways to feel not just optimistic about the future, but energised too, is to join spaces and communities filled with other motivated people.

We Don’t Have Time is a social network specifically for people who want to solve the climate crisis. The app connects like-minded people, enabling constructive dialogues around environmental action.

Interestingly the platform also serves as a space to allow individuals to review companies, public figures and organisations from an eco perspective.

Users can send ‘climate love’ to recipients who are doing something well, suggest ‘climate ideas’ for how to do something differently, or issue a ‘climate warning’ to urge organisations or individuals to stop doing something harmful.

Joining local branches of environmental activist organisations is another way to feel less alone in the fight against the climate crisis. Extinction Rebellion (XR), for example, has national and regional groups which organise series of protests and actions at a local level.

The organisation also has community groups which connect environmentalists based on shared interests or identities. There are options based on faith, sexuality, gender, ethnicity, profession and more - meaning you can be a part of a network with a shared self-identity, rather than just a shared locality.

XR have a series of co-ordinated protests, called the Impossible Rebellion, starting on 23rd August. Lots of people turn up alone so don’t worry if you’re new to climate protests - you’ll be warmly welcomed.

The IPCC report on climate change is 'code red for humanity'