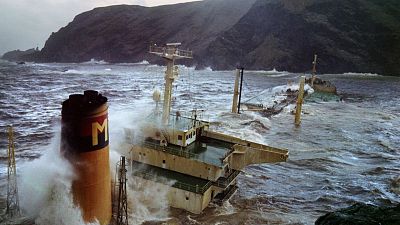 Robin Mace-Snaith is the Policy Lead for Climate and Energy at CAFOD. Here he gives us his take on why the UK government must divest from fossil fuel companies who ‘don’t care about their workers’.

The Intergovernmental Panel on climate change (IPCC) report released yesterday delivered us all a stark warning. Act now, or face catastrophe, we are at a ‘code red for humanity’.

Climate agreements and their associated summits are built on credibility and trust, and it's fair to say trust, by those worst affected by climate change in the global South, is low ahead of the next climate summit in Glasgow.

So, what is the UK Prime Minister, Boris Johnson, doing to make sure that as hosts of COP26 the UK is credibly tackling the climate crisis?

He is considering approving an oil field that will operate until 2050. Cambo oil field in Shetland would lead to the equivalent of ten times Scotland’s annual emissions. This would go against the recent advice from the International Energy Agency, which told governments not to develop any more oil or gas reserves, if we want a shot at limiting the worst effects of climate change (keeping global temperature rise below 1.5C).

Cambo oil field in Shetland would lead to the equivalent of ten times Scotland’s annual emissions.

Secondly, the government is considering approving a new coal mine in Cumbria, whilst saying one of their key aims at COP26 is to persuade others to ditch the exploitation of coal.

Confused yet? That’s not even half of it.

This government has also promised to end all funding to fossil fuels overseas, which halted the proposed £1bn support of a gas project in Mozambique and could be a truly world leading climate policy. However, to continue the run of undermining credibility of its own policy and commitments, the government slipped in a loophole that allows UK aid money to still fund gas-power plants in the name of sustainable development.

So, if approved, all of these projects would contribute to climate change and lead to the need for more investment in climate change adaptation, particularly in low-income countries. Current estimates say by 2030 that need will be over $300bn annually and rising. Yet current funding equates to around $15bn a year, much of which is delivered as loans, which only adds to the current debt crisis.

What's more, very little of the money actually gets to the people that need it the most. As a reminder, high income countries committed to provide $100bn annually, on top of development aid budgets, to low and medium-income countries - a key way to gain global trust. The UK provides its share through growth of the UK aid budget, but that same budget has just been cut by about £4bn - delaying and cutting projects that allow communities overseas to adapt to climate change.

After all, it is poor and marginalised communities across the world that are facing the immediate impacts of climate change, having contributed the least to greenhouse gas emissions which are warming the planet. For example, the entire Pacific region contributes to 0.03 per cent of total greenhouse gas emissions. Yet millions of Pacific islanders are bearing the severe impacts of climate change, such as rising sea levels, which undeniably pose an existential threat to their homeland, culture, livelihoods, and their Pacific identity.

We are already past the point of no return, and it is ordinary people who will suffer because of the choices executives make now.

The government should be supporting and re-training oil and gas workers to transition to jobs in sectors such as renewable energy or decommissioning oil platforms. Phasing away from oil and gas is vital to creating any sort of long-term protections for these communities and our climate. There will be no jobs for anybody on a dead planet.

The government should be supporting and re-training oil and gas workers to transition to jobs in sectors such as renewable energy.

So how should the UK Prime Minister build credibility? Firstly, by not approving the aforementioned projects, then secondly by stopping UK funded organisations such as the CDC Group (the UK’s Development Finance Institute) investing in gas-power plants that support the bottling of Pepsi or powering British Tobacco factories.

However, divestment also means ending fossil fuel sponsorship. Fossil fuels companies often look to ‘greenwash’ their reputations by cultivating sponsorship relationships to help create a ‘social licence to operate’. But often these sponsorships are used to gag critics as a legal bribe; the recent incident of the London Science Museum agreeing not to publicly criticise Shell, as part of a sponsorship deal for an exhibition about carbon capture, highlighted this blatant lobbying. What’s needed here is public pressure.

In his landmark letter to the world, the recent encyclical Laudato si', Pope Francis himself directly appealed to oil and gas companies to move from fossil fuels to renewable energy in order to prevent climate change, echoing his calls for radical action to fight the climate crisis.

But campaigners can’t shape the future alone. If Johnson wants a shred of credibility at COP26, he needs to invest in a green recovery at home and overseas in a manner that matches the scale of the crisis.

How can we make sense of Wynn Alan Bruce's self-immolation?