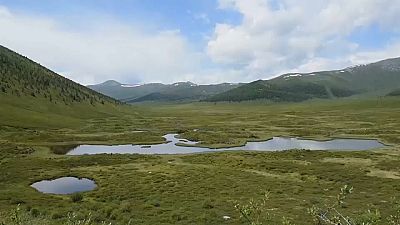 The land on this mountain range in Southern Siberia used to be permanently frozen.   -   Copyright  Euronews
By Euronews  with AP  •  Updated: 09/08/2021

The land on the Alash Plateau of the Sayan Mountains in the southern part of Siberia used to be permanently frozen.

But rising temperatures in the area have led to thawing ice that is radically changing the landscape.

Scientists from the Tomsk and Tyva state universities expect this area to be fully underwater in the not-so-distant future, due to the thermokarst lakes -- small bodies of water appearing when the ice melts -- expanding each year.

Siberian winters have warmed by between 2 to 4 degrees Celsius over the last 50 years. The increasing temperatures are releasing huge amounts of greenhouse gas that contribute to climate change.

"When the thermokarst processes intensify, organic matter begins to decompose in these lakes, and, accordingly, a lot of carbon enters the water, which is then released into the atmosphere, either in the form of carbon dioxide or in the form of methane," Sergey Kirpotin, chief researcher at Tyva State University, said.

The damage done by melting permafrost will be extremely costly for Russia, with an estimate putting the bill at €58 billion by 2050.

Scientists are now rushing to study the landscape ahead of the COP26 climate summit in Scotland. They hope to publish their findings later this year.

Watch the full video report in the player above.

Region in Siberia has longest cold spell for 14 years