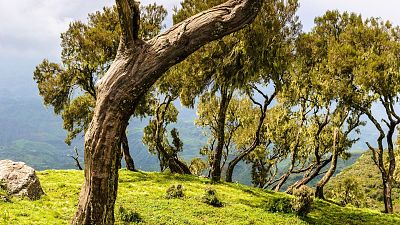 Ethiopians are planting millions of tree seedlings   -   Copyright  Canva
The opinions expressed in this article are those of the author and do not represent in any way the editorial position of Euronews.
By Mesfin Tegenu  •  Updated: 06/08/2021

Mesfin Tegenu is the Executive Chairman of the American Ethiopian Public Affairs Committee (AEPAC). Here he gives us his take on Ethiopia’s innovative approach to tackling climate change and explains how it's related to the crisis in Tigray.

Last month Ethiopians headed to the polls in the country’s freest election ever. It was the first time since 2005 that multiple parties had taken part and the first time ever that opposition leaders were allowed to engage in TV debates.

The conflict in Tigray, of course, cast a dark shadow over events, but as the Africa Union Observer Mission concluded: “there was nothing, in the Mission’s estimation, that distracted from the credible conduct of the elections.”

But, there was another story that was overlooked by the newscycle.

As voters went to cast their vote, they were also encouraged to plant a tree. The Ministry of Agriculture announced over the weekend that Ethiopians planted 87.4 million seedlings on election day. A remarkable achievement and a world first.

A further 545 million seedlings were planted during the pre-election period. This is a truly progressive and innovative approach to citizen engagement in the fight against climate change.

The drive was part of a wider project launched by Prime Minister Abiy Ahmed in 2019. The ‘Green Legacy Initiative’ will see 20 billion trees planted across the country by 2022. Already 50 per cent of the target has been achieved in two years with 27 million Ethiopians participating in the 2020 campaign. It has been a unique demonstration of a developing country taking heed of the seriousness of climate change and creating a project that includes mass citizen involvement.

It is one of many policies, including a focus on renewable energy projects, that the Ethiopian Government is pursuing to develop a green economy, recognising the value of tackling climate change through an economic prism. It’s an approach that would typically be lauded by G7 nations, particularly a Democratic White House and a Liberal European Union. However, the ongoing conflict in Tigray has overtaken Ethiopia-related discourse.

The conflict, which was initiated in November 2020 by the Tigray Peoples Liberation Front (TPLF) when they attacked military bases across the North of Ethiopia, has seen intense international scrutiny.

It has also shown how fickle support can be for emerging countries. In 2018 Prime Minister Abiy was held up as a darling of democracy. He received a Nobel Peace Prize for ending a long-standing war with Eritrea and his progressive economic reforms were widely praised. Just three years on and he and Ethiopia are subject to statements of condemnation and punitive measures such as visa restrictions.

There is no question that the Government of Ethiopia, TPLF and other actors deserve to be challenged in relation to the crisis in Tigray. Access to humanitarian aid is desperately needed and those who have committed atrocities need to be brought to justice.

But, there is a broader argument here.

As highlighted by the UNDP, a rebel group attacking Government military bases would be seen as an act of war anywhere in the world, and defensive action is justified. We have to be realists. This is a developing country making significant democratic and economic reforms, an African nation taking an international lead on the climate emergency, the biggest global challenge of our age. Is condemnation, are sanctions, are visa restrictions, the right course of action by leaders in Brussels and Washington, actions that destabilise and negatively impact the most vulnerable in society? I don’t think so.

The American Ethiopian Public Affairs Committee (AEPAC) leadership team is meeting with political stakeholders every week and our message is the same: work constructively with the democratic Government of Ethiopia to find a solution to the conflict. We need to continue to pursue our areas of common interest, namely the fight against climate change but also boosting trade and strengthening regional security in the Horn of Africa.

Such actions allow AEPAC to advance its mission of building a mutually beneficial 21st century partnership between Western Governments and Ethiopia.

It’s vital the conflict in Tigray is brought to an end. The current declaration of a unilateral ceasefire by the Ethiopian Government is welcome and will hopefully be heeded by the other parties to avert further humanitarian disaster. International pressure needs to be put on the TPLF to end its guerrilla warfare.

Our brothers and sisters living in the Tigray region deserve peace and Ethiopia needs to continue on its progressive journey of economic and democratic reform and tackling climate change.