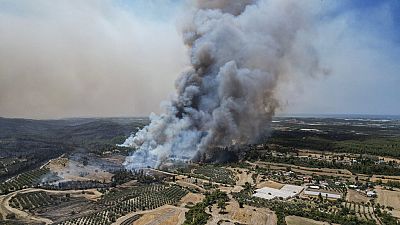 Wildfires raged near Turkey’s holiday beach destinations of Antalya and Mugla and in the surrounding countryside, with the death toll rising to eight on Sunday.

The Minister of Forestry and Agriculture, Bekir Pakdemirli, tweeted that five fires were continuing in the tourist destinations of Antalya and Mugla but that 107 others had now been subdued.

The fires in Antalya were burning in the Manavgat and Gundogmus districts. In Mugla, they have hit Marmaris, Koycegiz, and Milas.

Tourists were evacuated on Saturday from some hotels in Mugla's popular district of Bodrum as a fire spread down the hill towards the seashore.

Pakdemirli wrote that fires have sprung up in 32 provinces since Wednesday. Six people have died.

The European Commission said it helped mobilised one firefighting Canadair plane from Croatia and two from Spain to aid Turkey. Planes from Ukraine, Russia, Azerbaijan and Iran have been helping.

A heatwave across southern Europe, fed by hot air from Africa, has led to wildfires across the Mediterranean, including in Italy and Greece.

In Greece, a forest fire east of the country's third-largest city of Patras forced the evacuation of four villages and the rescue of people stranded on a beach. All in all, authorities have had to tackle 56 wildfires in the past 24 hours amid a combination of dry weather, a heatwave and strong winds.

In Italy, forest fires continue to burn across the south of the country which is in the grip of one of the worst heatwaves in decades. Sicily is the worst-affected region with local media reporting 250 interventions by firefighters in the previous 24 hours.

And in eastern Bosnia, a raging blaze threatened to engulf villages on Veliki Stolac mountain. The region is home to the Pancic spruce, one of the oldest tree species in Europe. The fire was eventually brought under control.

Temperatures in Greece and nearby countries in southeast Europe are expected to climb to 42 degrees Celsius on Monday in many cities and towns.

French firefighters are fighting forest fires with this balloon