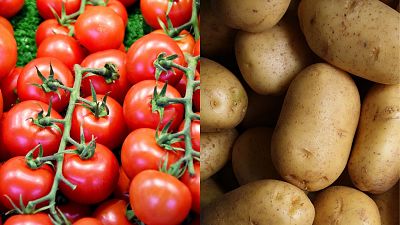 Pomato plants could be the answer to increasing the efficiency of food production.   -   Copyright  Unsplash
By Euronews  •  Updated: 28/07/2021

Aside from sounding like something from a sci-fi movie, plants that are half potato and half tomato could help to keep up with the demand for food.

Pomatoes, first grown in Germany, could improve the efficiency of food production without affecting the quality of the crop.

Although they may look very different, potatoes and tomatoes both belong to the same genus (the taxonomic order above species) so they can be grown as one plant. Above ground, they produce tomatoes and below a crop of potatoes.

Though this process is an ancient horticultural practice, bringing together soft-stemmed vegetables like these is a more recent practice.

These hybrid plants could help to make crops more efficient, maximising the yield that can be produced in urban environments. A greater quantity of food can be grown in small spaces such as balconies or rooftops.

This could have significant benefits for food security in countries like Kenya where populations are growing at a rapid rate. More people means more food but usable agricultural land is dwindling. Maximising efficiency helps to combat this problem as well as that of water shortages and disease.

How can you grow more than one crop on a plant?

These hybrid fruits and vegetables are produced using a process called grafting which brings together tissue from two or more plants. This technique has been used by farmers for thousands of years to reproduce varieties of fruit trees.

Usually, it is a combination of two plants, one that serves as a ‘root stock’ and an attached ‘scion’. There are examples, however, of multiple fruits being combined to create what has been called a ‘fruit salad’ tree.

Grafting one plant onto another allows the grower to exploit the qualities of the rootstock such as disease and drought resistance or - in the case of the pomato- to produce an entirely different crop. It combines the best qualities of both crops or can allow a farmer to grow whatever kind of plant they want, with a root system well adapted to the soil.

With environmental factors increasingly impacting farmers around the world, the ability to grow plants that can resist these changes and still produce enough food to feed us all is vital. Research has shown that crops with drought-resistant rootstocks could help us to mitigate the effects of water shortages in arid areas.

There are other possibilities too to make plants more disease resistant - and so use fewer pesticides, produce higher yields or even attract a more diverse group of pollinators.

Is Earth Overshoot Day earlier or later than usual this year?