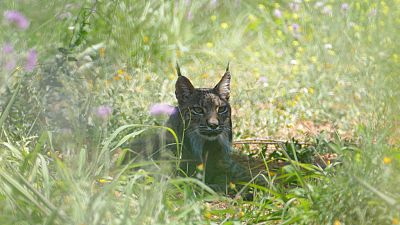 Just 20 years ago, Spain's Iberian lynx was at risk of becoming the first big cat to become extinct since the sabre-tooth tiger died out 10,000 years ago.

Now their numbers have jumped tenfold, with 1,100 Iberian lynx living in the wild at the end of last year, thanks to a programme of captive breeding.

"The main cause of death for wildlife, certainly in the natural environment, is related to human activities: roadkill, poaching, unwanted encounters," explained Antonio Rivas, the manager of the El Acebuche Iberian Lynx Breeding Centre. "So the further away the wildlife is kept, the less direct contact it has with humans, the better we understand it'll be"

There is also another risk to the cats at present, one the world knows only too well.

Like other cats, the Iberian Lynx is susceptible to COVID-19 but fortunately, the symptoms tend to be mild and the centre's veterinarian, Yasmin El Bouyafrouri does not it a major problem at present.

"Well, felines are indeed sensitive to SARS-CoV-2 and it has been detected in cats in some zoos. But in reality, they don't really have major symptoms, rather those that have died did so because of some underlying problem," Yasmin explained.

In the early 20th century there were 100,000 Iberian Lynx between Spain and Portugal. Now it's around one percent of that number, but things are looking up.

London Zoo's animals step onto the scales for annual check-up