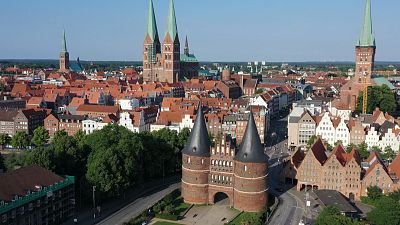 This month on Climate Now, we take a look at how UNESCO world heritage sites could be protected from the effects of climate change.  We visited the historic city of Lübeck in Germany to see whether it's possible to stop this kind of destruction and if so, how?

Before we go into the story, here's a quick summary of the latest data from the Copernicus Climate Change Service on a record-breaking month of June.

Looking at the globe as a whole, we had the fourth warmest June on record with temperatures 0.2 degrees Celsius above the 1991-2020 average.

However, June 2021 was remarkable because of a series of heatwaves.

Finland had its warmest June since records began; and the capital Helsinki hit a new record high for the month of 31.7 degrees.

North America also had its warmest June on record.

The town of Lytton in Canada hit the headlines after it hit an all-time Canadian high of 49.6 degrees. the surrounding area was engulfed in wildfires, and an estimated 90% of Lytton was destroyed by the flames.

In Europe the temperature anomalies across the continent were quite clearly defined, with the Baltic area, including Finland, clearly coloured highlighted in red to represent warmer than average temperatures. Meanwhile across the Black Sea area and the Iberian peninsula the temperatures were below average last month.

In regards to the precipitation anomaly in June, there was a lot more rainfall than average across the Black Sea and across western Europe.

In our report this mont we chose to look at how UNESCO world heritage sites are facing up to the historic threat from climate change.

We chose to focus on the city of Lübeck in Germany, which is embarced by the river Trave and sits unprotected from the nearby Baltic Sea. It is a position that helped the city to become an important medieval trading centre, but which now leaves it vulnerable to rising water levels.

Founded in 1143, Lübeck is famous for its gothic churches and merchant mansions. City authorities would like it to be enjoyed for centuries to come and that means facing up to the effects of climate change.

Catharina Vogel, world heritage coordinator for the city of Lübeck, told Euronews that they are now in the process of evaluating the risks and how to manage them. She says this means considering the effects not only of flooding amplified by rising sea levels, but also heavy rain and extreme droughts.

Our report was filmed a few weeks before the deadly floods which brought devastation to cities in other parts of Germany, Belgium, the Netherlands and Luxembourg, which stand as a testament to the kind of destructive power that storms can now bring to historic urban areas across Europe.

Not a new problem, but a growing one

Flooding is not a new problem in Lübeck, but it's a growing one. We met Professor Arne Arns, an expert in coastal engineering at the University of Rostock, who is now working on a research project to advise the city on future risks based on climate scenarios and historical records.

He takes us to a marker for the famous storm surge of 1872, which claimed many lives along the Baltic coast, and which remains the record-high point for high water in Lübeck.

"If we imagine that the sea level will rise by about a metre, maybe even 1.5 metres in the next 100 years, it means that we're going to end up with the highest water level possible right up here", he explains, pointing to a spot a metre above the brass plate, well above our heads.

Preparing for such climate change effects raises many questions. Flood defenses could ruin the city's historic charm and put its UNESCO status at risk.

Naturally, it is important that the city is protected and, at the same time, that the world heritage is treated responsibly

But action must be taken. Arne says that the city is quite inflexible due to the compact nature of its layout. He thinks that the only thing they can do there is "prevent the high water from entering the Trave" or add a protective element like a flood protection wall. Neither option is cheap, and flood barriers in the city would ruin its historic charm, and leave its UNESCO status at risk.

As the city considers its options, the locals are already getting prepared. We met Jan Dohmeyer, who is restoring his house, first built in 1385. It has survived fires and many low level floods. Now, 170 years later, Jan is restoring it once again, and installing drainage pumps on the ground floor and flood protection barriers in the alleyway beside his house.

Is he concerned about the sea-level rising and flooding?.  "Yes, of course, because, after all, the water rises 2, 3 millimeters every year. It's not much, but in ten years it's so much, and in 20 years it's that much more. And our kids are three and five. So what happens in 50 years?" he asks.