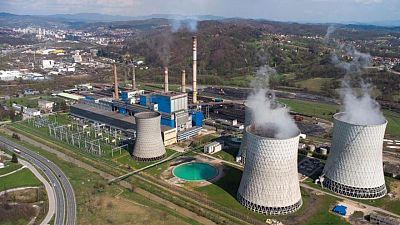 A Chinese-backed deal to help Bosnian electric utility company, EPBiH, expand its coal-fired power plant in Tuzla has run into problems with funding.

US conglomerate General Electric has withdrawn from the project, a senior Bosnian official told Reuters on Thursday, meaning plans might not go ahead at all.

The coal-fired plant would have cost over $1.1 billion (€931,256,349) to erect, according to the recent publication of documents on Sarajevo news portal Klix. The news was also confirmed by comments from the industry and energy minister in the government of Bosnia's autonomous Bosniak-Croat Federation, Nermin Dzindic.

EPBiH picked China Gezhouba Group and Guandong Electric Power Design in 2014 to build a 450 megawatt (MW) unit in Tuzla at a cost of 1.8 billion Bosnian marka ($1.1 billion) to replace three ageing units at the 715 MW plant.

The documents released by Klix said the Chinese partners had informed EPBiH in January that General Electric would be dropping out and offered alternative subcontractors, but EPBiH rejected the proposed replacement companies.

"In this way, the contractor was left without the nominated subcontractor for the boiler, turbine and generator," Dzindic said, adding that the government had passed the information on to parliament to decide on the next steps.

General Electric did not immediately respond to requests for comment about the Bosnian project.

What about renewable energy?

General Electric announced in September 2020 that it would stop making coal-fired power plants as the U.S. industrial conglomerate focuses more on renewable sources of power generation.

So it is open to speculation as to whether this is why the company pulled out.

According to the same documents released by Klix, EPBiH said it would break the contract, which is estimated to be the biggest post-war energy investment in Bosnia, unless the government and parliament propose a different solution.

Construction was supposed to begin in July last year but was delayed due to the coronavirus pandemics.

How is Bosnia and Herzegovina affected by climate change?

Bosnia and Herzegovina is particularly vulnerable to climate change due to its geographical position, economic reliance on agriculture, water management and forestry sectors, as well as its limited capacity for climate change adaptation.

But transitioning away from fossil fuels will require a huge political shift and incur job losses, as the country is so reliant on coal.

Countries in the Balkans that heavily depend on coal for power production have been increasingly turning to China for funding as the European Union, World Bank and other institutions cut back on financing coal-based projects.

In 2017, reliance on coal (lignite in particular) for electricity generation reached 96 per cent in Kosovo, 75 per cent in Bosnia and Herzegovina, and 71 per cent in Serbia.

However, investment in renewable energy is starting to increase in Bosnia. EPBiH finished its first wind power plant, Podveležje, early this year, and plans to add a 30 MW solar power plant at the same location.