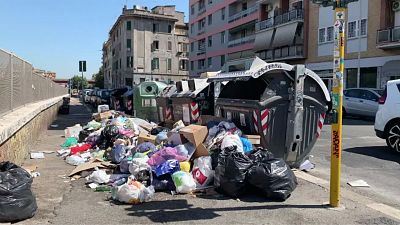 Overflowing rubbish bins in Rome are increasingly becoming a common site, with residents complaining that with high summer temperatures, it's only getting worse.

An association representing 4,000 restaurants in Rome, FIEPET, said their revenues have dropped due to waste being abandoned outside their premises.

“We have sent so many letters. Here in Rome, it’s even difficult to move bins from one side of the street to the other. You need to ask permission four or five times. Bureaucracy is killing businesses,” says Claudio Pica, the association's president.

Gabriele Tarnani, owns a restaurant in Rome called Bar Crystal and adds that the situation is frustrating and impacting customers.

"As you can see right next to the bins, there are people eating. The bins are normally filled with garbage, today there is not as much. We are experiencing a very difficult situation. The smell is horrible and it bothers customers and most of the time they decide to leave the restaurant in despair.”

The city has faced issues with its waste disposal for some time, and it has worsened since 2013, when its only landfill site, Malagrotta, closed.

The city has faced issues with its waste disposal for some time, and it has worsened since 2013, when its only landfill site, Malagrotta, closed.

It is forced to find other parts of the country in which to dispose of its waste.

The president of the Lazio Region thinks the city administration is unfit to resolve the problem while the city says it's the region's responsibility. Italy’s Environment Minister has also had to step in to help negotiations.

Katia Ziantoni, Rome’s councillor for waste, said people want an end to the problem but don't understand what's happening behind the scenes.

"They don’t know anything about what’s happening beneath the surface and that the responsibility is shared among several organisations.

"The region is in charge of waste management. Our role is to implement facilities according to what the regional plan says and that’s what we have been doing up until today,” she concludes.