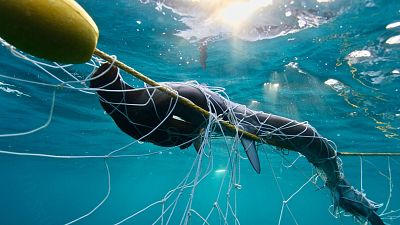 Nets and bait hooks are installed in almost one hundred beaches across the coasts of Queensland and New South Wales   -   Copyright  HMS/AMCS/N McLachlan
By Shannon McDonagh  •  Updated: 14/07/2021

Almost half of the world’s 400 species of sharks are found in Australian waters. Renewed efforts to protect the animal’s welfare are asking tourists to protest the country’s “archaic and ineffective” methods of human protection.

Marine campaigners at the Humane Society International argue that the country’s excessive use of shark nets and baited drum lines are leading to the “largest marine cull in history”.

Experts believe there is little evidence to support that the processes in place to protect tourists actually make Australia’s waters any safer.

Why are Australia’s current methods a problem?

The World Wildlife Fund for Nature (WWF) say up to 25 per cent of all shark species are at risk of extinction.

Australia remains one of the only countries in the world where it is permissible to cull sharks in the name of preserving life. Over 23 beaches contain harmful devices in Queensland, home of the Great Barrier Reef, which have killed over 500 sharks in the area since 2017.

Shark nets currently used on many of Australia’s coasts seek to randomly capture them regardless as to what their purpose was for venturing into that area. They are commonly left to struggle and die as a result of this practice.

Alternatively, 'drum lines use bait to lure the sharks towards a floating barrel that hooks into the shark with the intention of killing them near waters used for surfing and swimming. The practice has been condemned by the Australian RSPCA and a number of other animal rights organisations.

“These shark control programs are politically motivated, they’re not really about protecting swimmers at all because the science and our courts have acknowledged they’re ineffective,” says Lawrence Chlebeck, marine campaigner at Humane Society International/Australia, who features in an upcoming Disney+ documentary on the subject.

“Thousands of sharks, dolphins, rays, turtles and whales – including species already in decline and struggling for survival due to myriad threats - are silently suffocating to death underwater because the Queensland and New South Wales governments refuse to drag their thinking into the 21st century.”

Chlebeck points to dwindling shark numbers along these coasts as evidence the devices are seeking to destroy the animals, rather than manage their behaviour.

The Humane Society is asking Australians and visitors to its many beaches to push for non-harmful shark technologies to be used in the waters they visit for tourism-related activity.

These include the following:

A low-maintenance, eco-friendly kelp barrier that uses magnetic stimuli to dissuade sharks from passing through waters occupied by tourists. Prototypes have been successfully deployed in South Africa and the Bahamas.

Operates under a similar framework to the barrier, using electrical pulses that create a three-dimensional field to trigger the sensitive receptors sharks use for hunting. Researchers understand this process is not painful to the shark - it just encourages them to turn away.

This technology can provide real time aerial surveillance of a coastline, with the ability to not only detect sharks in the water, but also identify species and clear the water if a species of concern is seen. They are currently operational on 34 beaches in New South Wales and there are plans to trial more in Queensland.

Arguably the most important deterrent to avoiding shark-related casualties is understanding their behaviours better. Public guides covering topics such as water temperature, visibility, bait balls, animal remains, time of day, and moon phases can allow individuals to better protect themselves when entering the water.

What progress has been made?

There has been steady progress in recent years in developing a suite of effective tools to manage the inherently low risk of a shark bite. The methods listed above are all understood by experts to be more effective and less lethal that what is commonplace in Australia at present.

The Humane Society was central to a landmark case against shark culling in the Great Barrier Reef. The tribunal found that killing sharks does not reduce the risk of unprovoked shark interactions, and that scientific evidence was "overwhelming in this regard".

It’s conclusion advised that lethal methods soon be replaced with better alternatives that are backed by research, and that drum lines need to be checked more frequently to monitor the suffering they potentially cause.

“These killing programs have been going on for 60 to 80 years,” explains Chlebeck.

“Shark culling is a relic of the past. First introduced in the 1930s at a time when we didn’t know much about biodiversity, shark behaviour or sharks’ vital role in ocean ecosystems. It makes no sense at all to ignore all that knowledge and carry on regardless with a lethal program that doesn’t even benefit public safety.”

The problems faced by Australian sharks will be highlighted in a new Disney+ documentary featuring the Humane Society among other key players in marine conservation. Envoy: Shark Cull will be released shortly after Shark Awareness Day on July 21.

This new ‘smart fabric’ can keep you cool during a heatwave

Pope Francis will attend COP26 in November if his health allows

Only 10% of Brits realise the human consequences of biodiversity loss

This unexpected solution could save the world's depleting corals

Why is it snowing in the Sahara Desert?