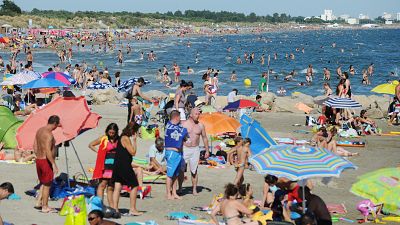 "With climate change and global warming, protecting ourselves from the sun is going to start to be more of a problem for us."   -   Copyright  SYLVAIN THOMAS/AFP
By Pascale Davies  •  Updated: 08/07/2021

With Europe set to experience intensely high summer temperatures in the next few weeks, dermatologists are expecting a significant spike in skin damage.

Around 75 per cent of people in Europe have suffered from sunburn in the last decade, according to Garnier Ambre Solaire’s Sun Care Census. The study surveyed 15,000 people in the UK, Portugal, Italy, Spain, Denmark, France, Finland, Belgium, Germany and the Netherlands.

Despite repeated warnings to protect skin against the sun due to skin cancer concerns, many people are not paying attention despite warming temperatures and an increase in heatwaves.

"I think with climate change and global warming, this (protecting ourselves from the sun) is going to start to be more of a problem for us, dermatologist," Dr Justine Kluk tells Euronews Green.

Europe experienced its hottest year on record last year, according to Copernicus. Scientific research has also warned of summers becoming hotter and longer.

So why and how should we protect our skin from the sun? Dermatologist Dr Justine Kluk tells us her top tips to keep you safe.

How can the sun harm our skin?

“We know that episodes of sunburn increase our risk of skin cancer like melanoma, which is deadly, and nine out of 10 cases are preventable with good sun protection,” says Kluk.

But not only can the sun increase our risk of skin cancer, she says.

“It also increases our risk of skin ageing, of aggravating certain skin conditions. And so we need to make it part of our daily routine.”

Why are people not protecting their skin?

Some of the worst perpetrators for skin damage were the Portuguese, according to the survey.

“I think part of it is thinking that if you live in a sunny place, you may be less susceptible to sun damage because your skin is conditioned somehow,” says Kluk.

With climate change and global warming, this (protecting ourselves from the sun) is going to start to be more of a problem for us.

Another reason she says, is because of the lack of education about sun dangers.

“People don't realise that you can still experience the effects of the sun through clouds.”

How can we better protect ourselves?

Sunscreen is what first comes to mind but there is more we can do.

“Sunscreen is not the only answer. We also need to seek the shade and wear hats and sunglasses and sunscreen, not a sort of invincible shield, but it's definitely better than nothing,” says Kluk, adding that long clothing should also be worn too as well as avoiding the sun between midday and 2pm.

How to pick sunscreen

Kluck says to pick a broad spectrum sun protection product, which means it protects you against UVA and UVB rays.

You also need an SPF 30 or higher, she says.

“The reason for that is that lower than that, you probably don't get as much protection as you could. And also, people don't tend to apply as much sunscreen as the brands tests on in the lab when they put the SPF on the side.

“If you choose a higher factor and then apply the right quantity, you can be extra reassured.”

How often should we re-apply sunscreen and what does SPF mean?

“We generally say two hours as a rule. So what a lot of people don't know is let's say I go out in the sun without any sun protection on and it takes 10 minutes for my skin to redden, which is a sign of burning.”

How much sunscreen do I need to apply?

There are many ways to measure how much sunscreen we should apply.

But Kluck says half a teaspoon for face, neck and ears. Or, two generous finger lengths. But she says it’s easy to go wrong with that rule.

For the body, she says a golf ball sized blob or a shot glass sized amount.

How do we avoid getting sun cream in our eyes? And how can we protect our entire bodies?

“In skin cancer clinics, we often see people with sun, with skin cancers on their ears or around the eyelids when the hairline, the bits that people often tend to miss,” says Kluck.

To protect the skin around our eyes, she says using formulas designed for sensitive skin are appropriate. But if you’ve tried many different sun creams and it is still stinging your eyes, she says make sure you're wearing sunglasses as a back-up protection.

UK heatwave: What is a heat dome and why do they happen?

Cows can be 'potty trained like children' for greener environment