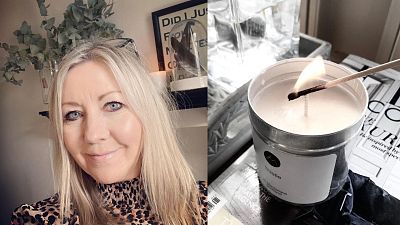 As a former British Airways hostess, Jo Macfarlane capitalised on her people skills and first class flare to launch a luxury, sustainable candle making business. Now, she wants to help others find more eco-friendly ways to pursue their ambition.

When airline staff started losing their jobs early on in the pandemic, Jo realised she was uniquely qualified to advise others who found herself in the same position she had been in.

Especially as she also had to adjust to the ‘new normal’, pivoting her business to provide online courses in creative candle making and even publishing her own book Ask And Act.

Jo taught making and pouring candles to more than 300 people around the world online during lockdown.

Below, we find out more about her business, future plans and how she helps others to be more green through her work.

Hi Jo, tell us more about your time working for British Airways and why you took the plunge into candle making?

I used to work first class a lot of the time, and left the industry while I was pregnant with my son so that would be 13 years ago now. I didn’t know what was next, but I had always come from an artistic background.

I tried out a few different things, but the candles really came about because I wanted to do something which expressed my interest in the planet and environment. I’m not an eco-warrior as such, but I’m very conscientious about what we’re doing to the planet.

It was around Christmas time and I was looking at these beautiful vessels that I had left over from candles which had burnt out, pots and other bits and pieces. And that’s where it all began - I decided to make my own candle to fill the pot, rather than chucking it in the bin.

I remember I went to a high street shop and bought wax and wicks, got home and did a bit of research on how to make candles. I soon realised that what I had bought were substandard ingredients. I couldn’t even use it. So I went online and started looking into soy wax rather than paraffin wax. That’s what I had originally bought - paraffin wax and wicks with wire in them - I didn’t even know that was a thing!

This literally began around my kitchen table. I started selling them through word of mouth, and suddenly I had people coming to me asking how they could make their own candles too.

So that’s when you started your workshops?

Yes - up to that point I had really been winging it, but I invited round a few of my friends and we all sat at my kitchen table and made candles together.

Again, the word spread. I started welcoming people from around the country who I didn’t know, all in my kitchen.

After a couple of years, I found myself brokering a deal with luxury hotels - like the Fairmont Hotel here in Edinburgh. Businesses were drawn to my sustainable USP [Unique Selling Point] and our range of scents. I was doing corporate gifting plans and candles for the hotel itself.

A studio came up for rent not long after and I knew I was ready to take the company out of my house. The studio became this lovely, stress free environment - I could set everything up the night before. It was my space.

That must have been a real milestone moment.

It was. I think as an air hostess I had always been used to being around people which is why the workshops became such a big part of my business. But even now - people who come to my workshops know there's no technical equipment. They literally get given a pan, a jug and a spoon.

It puts people in a comfort zone because they just think: I have all these things in my kitchen. Even if they had never made anything in their life before, it became clear that this was a very accessible model.

Lockdown must have had a huge impact on that format?

Yes I had to majorly pivot the business. We couldn’t welcome anybody. So I grabbed my filming equipment, which consisted of my iPhone, some lighting and a stand. I was filming from my kitchen again.

Now, people have taken my courses around the world, which is more than I ever thought was possible. It’s so nice to welcome international candlemakers into my kitchen, even virtually!

The past year and a half has given people more opportunity to think about their business strategy and things they would like to change. Are there any upcoming changes for Jo MacFarlane candles?

In the short term, I’m moving to organic wax. It’s three times the price, but I believe that’s the way I should be going. There’s actually a shortage until July so it’s been a bit of a slow process.

I’ve actually just put this on the website this morning so this is a bit of an exclusive: I’m going to be supplying eucalyptus seeds with every order, so people will be able to use their left over pots to plant things in.

Do you consider yourself a sustainable person?

My son and I are both vegetarian but I verge on veganism nowadays. All you have to do is watch shows like ‘Cowspiracy’ and ‘Seaspiracy’ and it makes you realise the damage being caused by the meat and fish industry.

The furniture in my home is generally things I have found and upcycled. In 2019, I actually did a year of only buying secondhand clothes. When I got to the end of the challenge, I realised I wanted to make that more of a lifestyle - everything I’m wearing now is from charity shops or secondhand sellers online.

These are values I try to instil in my son, too. The next generation is our future, so it’s important we educate them now.

Do you think your career in airlines plays a part in how you’re choosing to live your life now?

Definitely. I’m based in Edinburgh and spend a lot of time in London. While a plane and driving would be much quicker and sometimes cheaper, I’ll always opt for the train. I actually really avoid planes where possible now - though of course sometimes it is unavoidable!

What should people do if they want to live a greener life?

It’s easy to become overwhelmed by the responsibility we can feel towards the climate nowadays. But there are small things people can do - of course the big one is plastic. Try to cut down your plastic consumption where possible, and where unavoidable make sure it goes into the recycling.

A couple of years ago I went to a climate change festival in Edinburgh and left nearly in tears thinking about what we had done and all the things we need to do now. I suppose the other simple change people can make is dietary - you don’t have to totally eradicate meat and cheese, but cutting down will do so much for your footprint.

And what advice would you give to people who want to start their own business from their kitchen?

Just start. As with anything. Don’t wait until tomorrow. Do it now.

Thanks so much for chatting to us Jo! Make sure you check out Jo MacFarlane candles on social media and the website.

Reusable bags aren’t the sustainable solution you might think

‘Cars are an addiction’: How Lisbon is turning green for good