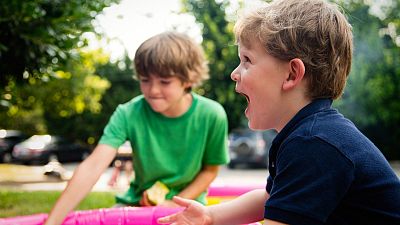 From travelling via trampoline and zip wire to powering trains with hamsters, children have revealed their grand designs for ending climate change. Their suggestions also include banning homework for using too much paper and requiring everybody with a garden to plant at least three trees in their backyard.

The proposals were revealed ahead of the launch of National Grid’s ‘Voices for a Green Future’ competition.

Entries ask that kids say in 200 words how they would tackle climate change if given the opportunity to take control. Winners will get the chance to put these suggestions to global leaders at the UN’s 26th Climate Change Conference (COP26) in a pre-recorded video in November this year.

The most eco-conscious generation

Over half of these children named Sir David Attenborough as their top ‘climate change hero’, beating such names as Greta Thunberg and Chris Packham CBE for top spot. The study shows that this generation could be the most eco-aware, with 62 per cent naming climate change as the issue on which they feel most passionate.

“Climate change impacts us all, but it is our children’s futures that will be most affected by the decisions we make today,” explains David Wright, chief engineer of National Grid and one of the competition’s judges, “so it’s vital that their voices are heard.

“I’m excited to hear from young people all over the country - they have inspiring ideas and they really can be the energy problem-solvers of tomorrow.”

This sentiment is shared by COP26 President Alok Sharma.

“The role of young people in tackling climate change, one of the greatest challenges of our generation, will be crucial,” says Sharma. “It requires action from each of us on an individual and collective basis and I’m keen to hear from young people across the country.

“I want them to raise their voices so that their interests are heard loud and clear at COP26,” he adds.

Though these grown-ups may have faith in the younger generation, the feeling is not reciprocated, with 83 per cent of kids stating that they don’t believe adults are doing enough to end climate change.

Instead, they derided their parents for careless habits like leaving lights on, consuming fast fashion and driving “gas-guzz[ling]” vehicles.

Though some of their more colourful ideas may be less feasible, the kids demonstrated expert knowledge of the cause and effect of climate change, expressing their desires to see the UK using more renewable energy sources such as wind, solar and tidal and heavily reducing plane and car travel.

For children with more bright ideas on how to save the planet’s future, National Grid’s Voices for a Green Future competition opens for entries on Monday 21st June. Children and their parents/guardians can enter by visiting www.nationalgrid.com/voicesforagreenfuture.

Explained: What is LNG and why does the EU want so much of it?

How is Egypt preparing to host the COP27 climate conference this year?