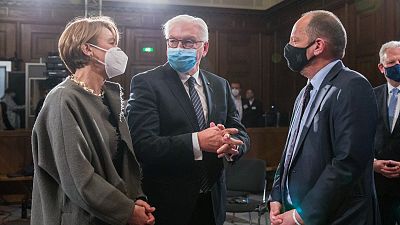 A panel of top international lawyers assembled by the Stop Ecocide Foundation have published a legal definition of ecocide for the first time.

Approving the right definition could pave the way for acts of environmental destruction to be prosecuted and condemned by the International Criminal Court, under the same consideration as war crimes, crimes against humanity, genocides and aggression.

For barrister and member of the panel Philippe Sands, this definition is “intended not only for human beings, but also for the well-being of our total ecosystem.”

“It causes us to think the law can actually help,” he said at a press conference.

What is the definition of ecocide so far?

Deriving from Greek and Latin, ecocide can literally be translated as ‘killing our home’.

It first appeared on the mediatic scene in 1970, when biologist and professor Arthur W. Galston coined the term at the Conference on War and National Responsibility in Washington DC, US.

Ecocide takes into account all possible forms of mass environmental destruction, basically every possible example of damaging nature, from industrial pollution to animal extinction due to human activity, or the presence of microplastic beads in the ocean.

The word ecocide has been the source of many debates among academics, climate activists and lawyers. But it has gained a more important prominence as movements to act against climate change have put it under the spotlight.

From Greta Thunberg to Pope Francis, and French President Emmanuel Macron, the word has seen a real revival. Now it’s time to fix its legal meaning.

Today, the panel has come up with the following definition:

Ecocide means unlawful or wanton acts committed with knowledge that there is a substantial likelihood of severe and either widespread or long-term damage to the environment being caused by those acts.

Who is the panel of experts behind the new definition?

Sands teaches at University College London and is a barrister at Matrix Law in the UK, France and Mauritius. “The time is right to harness the power of international criminal law to protect our global environment,” he explains to the Stop Ecocide Foundation.

“Seventy five years ago, ‘crimes against humanity’ and ‘genocide’ were spoken for the first time, in Nuremberg’s Courtroom 600, and my hope is that this group will be able to draw on experience since that day to forge a definition that is practical, effective and sustainable, and that might attract support to allow an amendment to the ICC Statute to be made.”

For UN jurist and former prosecutor Dior Fall Sow, “recognising ecocide as an international crime is the most appropriate approach to fight against the impunity of this crime and its perpetrators,” she commented after today’s press conference.

The duo worked with 12 other significant figures on the judicial and climate protection scene to create this panel, such as French international jurist and human rights expert Valérie Cabanes and chief executive of the Bangladesh Environmental Lawyers Association, Syeda Rizwana Hasan.

Contacted by Euronews, Kate Mackintosh explains that they "have come to a point where destruction of our environment needs to be condemned by the global community who depend on it."

"We need to make clear, in both practical and symbolic terms, that these acts of destruction cannot continue with impunity, and that the time has come for ecocide to take its place alongside the other international crimes," explains the executive director of the Promise Institute for Human Rights at the UCLA School of Law.

Why does a definition actually matter?

So far, only four kinds of crimes are judged by the International Criminal Court (ICC) in The Hague, Netherlands.

This court investigates and, where warranted, tries individuals charged with the gravest crimes of concern to the international community: genocide, war crimes, crimes against humanity and the crime of aggression.

Adding ecocide to this list is being seen as revolutionary. Unlike suing and fining corporations (who simply budget for this possibility), making ecocide a crime creates an “arrestable offence.”

It makes those individuals who are responsible for acts or decisions that lead to severe environmental harm liable to criminal prosecution.

Jojo Mehta, Chair of the Stop Ecocide Foundation commissioning the panel’s work, explains the significance of the project.

“When parliamentarians from a number of countries, from European states to Pacific islands, will be considering this definition in the light of possible proposal at the ICC, the text that emerges over the coming months must be both clear and legally robust,” she says.

“It was vital that the drafting panel had in-depth relevant legal expertise as well as a breadth of geographical perspective,” she adds.

Stop Ecocide was co-founded in 2017 by barrister and legal pioneer the late Polly Higgins and current Executive Director Jojo Mehta, aiming at facilitating steps towards making ecocide a crime in the eyes of the ICC.

Other organisations took part in this international campaign such as Extinction Rebellion in 2019.

Some mentions of ecocide already exist in ten states, including Russia and Kazakhstan, but have been scarcely brought into court since their creation.

What happens after properly naming the law?

In order to make ecocide an international crime, it needs to go through a four-stage process.

The first one is the proposal: any state which has ratified (officially agreed to) the Rome Statute of the International Criminal Court (ICC) may propose an amendment. There are currently 123 of these “States Parties”.

Second stage is admissibility: this requires a majority of those present and voting at the next annual assembly of the ICC to agree that the amendment can be considered.

This means the voice of a small Pacific island is just as powerful as that of a large nation.

In the third stage, with a two third majority in favour of the amendment, the law is adopted into the statute, and the crime exists.

Kate Mackintosh hopes that "some of its stronger supporters will take this up and move it through the various stages of deliberation among those states."

"We have had preliminary interest from a number of states, but the support of civil society as well as parliamentarians in the member states will be crucial to getting this through," she adds.