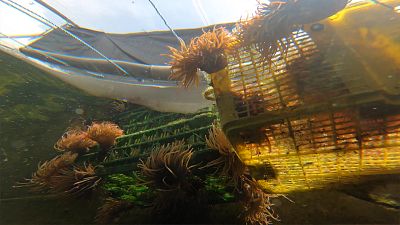 These polyps are massively harvested on the seafloor by both legal and illegal fishermen and now the delicate invertebrates are declining in numbers and falling victim to their own success in traditional local gastronomy.

Researchers from iMare Natural, a spin-off company from the University of Granada, are cultivating anemones in a controlled aquaculture system that used to be an old fish farm and then releasing them on the seafloor. It's their hope that this project will restore natural populations.

Ana, the manager of the pilot aquaculture plant, showed us how this facility mimics the functioning of natural ecosystems to minimise waste, water use and energy consumption.

Many hope that this approach, known as integrated multi-trophic aquaculture (IMTA), will soon reduce many environmental concerns associated with traditional fish farming methods.

To watch the full interview with Ana Esther Ortiz Maldonado, click on the media player above.