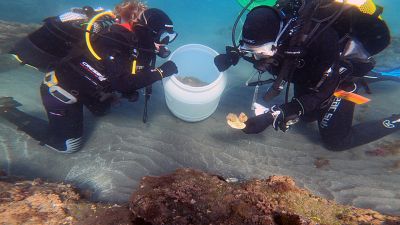 The hot and sunny coast of Andalusia is home to a local species of sea anemone. It's called Anemonia sulcata and it plays an important role in the coastal ecosystem. It also shows promising pharmaceutical properties and the local cuisine has long discovered its gastronomic merits.

The otherwise known as 'ortiguillas de mar' can be found on the menu of many restaurants in the area.

Chef Chechu González tells us that they use it a lot in Andalusia "thanks to its versatility". It has a very original, very deep taste of the sea, and that opens up many culinary possibilities", he adds.

Cooking anemones is easy. You just coat them in flour and cook them for a minute in hot olive oil. Under the crispy crust, the anemones remain soft and juicy.

Saving the anemone populations is much harder.

Ana Esther Ortiz is the Aquaculture plant manager at iMare Natural, a company founded by the University of Granada. She grew the anemones we were served at Chef González's restaurant. She does so with the help of the"ORTIMAR Project: Strategies for captive reproduction of the sea nettle (Anemona sulcata) to optimize its reintroduction into the natural environment", framed in the Pleamar Program with the collaboration of the Biodiversity Foundation of the Ministry for the Ecological Transition and the Demographic Challenge and co-financed by the European Maritime and Fisheries Fund.

Its ultimate goal is to restore the anemones' declining populations.

Ana tells us that "all the anemones that consumers buy on the market and in restaurants come from extractive fishing, and that has led to a significant decline of stocks in their natural habitat. That's why there's a need to establish a good management mechanism because without it, this species will eventually be listed as in danger of extinction."

The tanks at iMare Natural were once used to produce fish, but today they are part of its pioneering experiment and now they have found a way to effectively and sustainably cultivate sea anemones.

Ana explains that the sea anemones are grown, reproduced and cared for in the tanks "before reintroducing them back into the sea."

Researchers took a hundred anemones from the sea and multiplied them fivefold using asexual reproduction methods.

Anemones require specific water temperature and composition. Scientists recreated conditions similar to their natural habitats, whilst minimising one of the main problems facing the aquaculture: nutrient and chemical pollution.

However, reducing waste is often a challenge for aquaculture facilities.

Ana tells us that they reduced the waste in their small marine ecosystem as "some species use the organic waste of other species to keep the system completely clean. That reduces the carbon footprint, the need for seawater and also the energy consumption".

This could also help agriculture. The hydroponic plantation of salicornia, 'sea asparagus' at iMare Natural thrives on the same saltwater that is used by marine animals and microalgae.

Marta Delgado Herrera, a researcher in aquaculture at iMare Natural explains how it works to us. The plants' root systems absorb nutrients from the water, purifying it of excess nitrogen and then the clean water goes through pipes and back into the tank system.

It’s one of the most promising directions for the future development of European fish farming. The new EU strategic guidelines for this sector put a special emphasis on environmental sustainability and innovation in aquaculture.

Ana and Marta release batches of anemones back into the sea, right next to some of the most popular beaches. They put them in an appropriate zone where there's plenty of light, shallow water and a rocky substrate.

If you dive in this warm coastal water, you can see rocks covered with thriving anemones. This indicates excellent conditions for colonies. Not very far from these areas, you will also find bare rocks. It's in these spots that the two women are trying to start new artificial colonies.

For practical reasons, the anemones remain attached to the chalky discs they grew on in the aquaculture facility when they are reintroduced to the sea.

According to Ana, the technology they are using to grow and reintroduce anemones can be "extrapolated to other species of invertebrates, like sea urchins, starfish, sea cucumbers and sponges". These creatures also have biomedical and biotechnological applications.

At the University of Granada, a team of physiologists studies tissue samples of anemones grown in different conditions. Researchers there say that animals raised in multi-trophic mini-ecosystems show lower stress levels than animals from single-species aquaculture.

Amalia Pérez Jiménez, a Professor of animal physiology, tells us that "in multi-trophic aquaculture there are multiple interactions between different species and that benefits the animal because that resembles the natural conditions".

Further study of anemones may open the way to curing cancer and other diseases. Some biomedical experiments have even shown that certain extracts from these invertebrates can stop the growth of cancer tumors in vitro.

Preserving sea anemones is a challenging task that largely depends on saving their declining populations from excessive and illegal extraction from the sea.

Using new methods of clean aquaculture, researchers and activists can help revive the rich diversity of underwater life along our shores.

A day with a fisherman: Why it's one of the world's most dangerous job

Anger after young seal is killed in a protected marine area