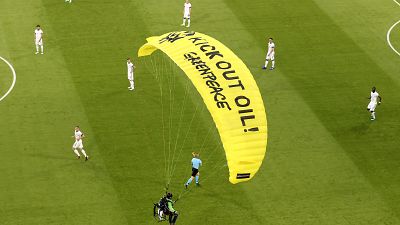 A Greenpeace paraglider lands at the Allianz Arena stadium in Munich prior to the Euro 2020 group F match between France and Germany, June 15, 2021   -   Copyright  AP Photo/activist Alexander Hassenstein, Pool
By Tim Gallagher  •  Updated: 16/06/2021

Greenpeace have apologised after a paraglider mistakenly landed on the pitch during last night's Euro 2020 Germany vs France match.. He is now believed to be in police custody. But what were they protesting, and why?

In a statement issued by Greenpeace they said, “A lone paragliding protester sought to fly over the stadium to release a soft ball carrying a note of protest against VW, a sponsor of the event, calling upon the company to accelerate its phase-out of climate-wrecking petrol and diesel cars.”

The protester veered away from the pitch and towards the main grandstand as he glided into the stadium. Several fans were injured by falling debris and he eventually landed on the main field.

Greenpeace blamed the accident on a technical fault which they say they are still investigating.

The pilot was described as “experienced” by a Greenpeace representative, although it appeared he struck wires and an overhead camera attached to the stadium roof.

Greenpeace has not yet provided information on who the protester is or how it was organised.

Why are Greenpeace protesting Volkswagen?

This is not the first time Greenpeace have taken on VW,

one of the world's biggest car manufacturers.

Greenpeace have continuously taken VW to task for their production of diesel cars and lack of effort to reduce their emissions.

In 2018 Greenpeace Senior Campaigner Rosie Rogers said: ““If Volkswagen is serious about doing its bit to tackle both our climate and air pollution emergencies, it needs to set a clear end-date before 2040 for its production of fossil fuel cars.

“We simply cannot wait nearly a quarter of a century to phase out the cars warming our climate and making our air toxic. People living in polluted cities and facing climate change-related disasters deserve better than that.”

For its part Volkswagen has stated they will be carbon neutral by 2050.

In 2020 the Volkswagen CEO announced they were searching for an “aggressive climate activist” to scrutinise their policies, however the company has a long way to go in terms of its public reputation on emissions.

In 2019 VW produced only 40,000 fully electric vehicles out of a total 11 million cars manufactured worldwide.

In 2015 the company was mired in an emissions scandal, “Dieselgate”, when it as revealed that Volkwagen had installed software in their models to trick emissions tests. It is believed that 1million extra tonnes of CO2 could have been released as a result.