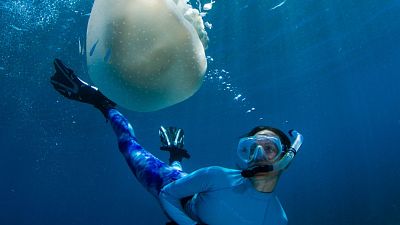 Céline Cousteau is an oceanographer, environmentalist, filmmaker and granddaughter of the celebrated explorer Jacques Cousteau. Celine is an ambassador for the TreadRight Foundation, the not-for-profit arm of The Travel Corporation.

In honour of World Oceans Day, she writes exclusively for Euronews Green about the importance of the oceans for the health of the planet and the difference that carbon removal projects can make.

To me, the ocean is many things. As an environmentalist, it’s an invaluable resource that’s home to some of the world’s most incredible species. As a mother, it’s an absolute wonder for my 9-year-old son. As an explorer, it’s a source of inspiration and adventure. As The TreadRight Foundation's ‘Planet’ Ambassador, it’s an enormous source of hope for our future.

Today on World Oceans Day, we advocate for the protection of our world’s ocean waters and habitats. I could scare you with the litany of risks facing our oceans. But I’d prefer to instil hope for the potential within our oceans to right some of our most egregious wrongs.

The wellbeing of humanity relies on the wellbeing of the planet. The list of challenges we collectively face can feel endless. The list of solutions addressing climate change, however, is steadily growing, and we may have to look no further than the waters surrounding us.

Our oceans need protection. We must eliminate the eight million pieces of daily plastic waste polluting our waterways by pursuing the long-term solution: prevention. But we wouldn’t be telling the whole story without addressing the fact that ocean restoration will unlock a natural means to mitigate humanity’s excessive carbon footprint and empower climate action.

I believe in big, bold ideas that are based in nature and backed by science. I believe each one of us is the solution. This is why, for the past 10 years, I’ve worked with the TreadRight Foundation to share the sustainable travel initiatives it supports worldwide. Two of the latest projects are marine-based carbon removal solutions, chosen for the way they support TTC’s Climate Action Plan.

They do this by taking olivine, a naturally occurring rock found on every continent, crushing it up and moving it to beaches or coastal areas where it can be broken down further by the natural weathering process of wave action. As the olivine sand breaks down, carbon dioxide is removed from the air and becomes bicarbonate, which is used by marine organisms in their shells and eventually ends up as limestone on the ocean floor.

Project Vesta estimates olivine could capture 1 gigatonne of carbon dioxide a year if deployed on just 0.25 per cent of global shelf seas. It would take 16 billion tree seedlings growing for 10 years to sequester the same amount of carbon.

Vesta has pilot beaches in the Caribbean and Hawaii. When they have validated that the process works and is ecologically sound, they will share their results so Coastal Carbon Capture can be replicated in coastal areas worldwide.

These projects, which harness the power of the ocean to ultimately benefit people, wildlife and our planet’s future, show us the solutions we require already exist, provided to us by nature. I call on governments and businesses worldwide to seek out these solutions and help them scale so we may all benefit.

A farming technique ‘to heal our planet’

GreenWave is trying to show the many benefits of ‘zero input farming.’ GreenWave is studying how kelp, extracted from the ocean, can be added to soil to increase its carbon storage potential, while decreasing harmful nitrous oxide emissions on regenerative land farms.

Kelp could reduce both the need for nitrogen additives (fertiliser) on crops and nitrous oxide emissions in soils. In other words, regenerative ocean and land farms working together to create a net benefit for the climate.

Some of you might have seen the Netflix documentary ‘Kiss the Ground.’ In that, actor and activist Woody Harrelson says regenerative agriculture is “a simple solution—a way to heal our planet.”

Three years of pedalling: This power couple take on an eco adventure

Magnetic migration: Sharks’ have GPS to navigate the oceans